Copyright: © © 2021 Khalid Hamdi MD. This is an open-access article distributed under the terms of the Creative Commons Attribution License, which permits unrestricted use, distribution, and reproduction in any medium, provided the original author and source are credi

Mediastinal malposition of a catheter enhanced by an unusual stenosis of the left brachiocephalic vein due to a former long-term haemodialysis catheter: A Case report

Abstract
The catheterization of a central vein is a routine invasive procedure in medicine. Nevertheless, it has potential severe (sometimes fatal) complications which are prevented by anticipation of risk factors and a careful and a posteriori-controlled placement with the use of chest radiograph or when necessary computed tomography (CT) scan. We are reporting the case of a mediastinal malposition of a hemodialysis catheter with perforation of the left proximal brachiocephalic vein caused by a downstream venous obstruction. That obstruction was revealed on the chest CT scan by an opacity along the left innominate vein suggesting the calcification of either a catheter cast or a thrombus due to a former long-term subclavian hemodialysis catheter removed a few days earlier. These conditions may be falsely diagnosed as catheter fragment retention which would lead to an unnecessary and dangerous invasive procedure of extraction. Our goal is to highlight those rare complications as well as to discuss their prevention.

Introduction
Since its introduction in clinical practice in 1945, catheterization of a central vein has become a routine invasive procedure, especially in acute medicine, but not without risk. Despite complications of different incidences, the risk is estimated at 4% under ultrasound guidance.

The most common complications of central line insertion are pneumothorax and catheter malposition. Other less frequent complications were reported, like puncture of the phrenic nerve, the thoracic duct, or the thyroid; as well as malignant arrhythmia and hemopericardium aggravated by lethal tamponade [1]. Vascular injuries, including perforation, arteriovenous fistula, arterial dissection, or appearance of arterial pseudoaneurysm, can also complicate the insertion of a catheter.

The main mechanisms responsible for a venous perforation by a catheter moving out of the intravascular bed (Figure.1), are a too gruff dilatation or even a dilatation on a guide twisting, often resulting in an inadequately oriented insertion. Some clinical cases reported venous perforation with migration in the mediastinal position due to a too surly dilatation [2]. The recommendations to avoid those complications are careful dilatation, a minimal insertion of the dilator, and penetration of the equipment in the absence of resistance [3]. A control by chest radiography is required in order to confirm the good placement. If there is any doubt, investigations should be performed in order to avoid serious or even lethal complications. 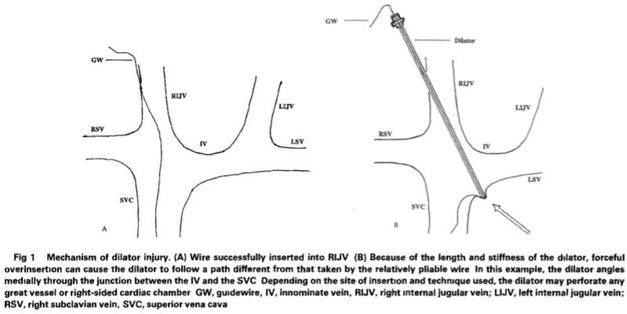 Case description
This is the story of a 44-year-old man, with a history of chronic hemodialysis, presenting to the emergency department because of fever, shivering, and asthenia following 3 days of purulent discharge at the puncture site of a left subclavian tunneled catheter. That catheter was positioned eight years earlier in the context of hemodialysis for chronic renal failure following vesicoureteral reflux. Several attempts of creation of arteriovenous fistula failed to develop and recurrent abdominal infections contra-indicated peritoneal dialysis. In addition, a kidney transplant at the age of 21 was rejected a few years later.

During his hospitalization, a Pseudomonas Aeruginosa bacteremia was diagnosed at the starting point of the catheter, imposing its removal. No adverse event occurred during the removal of the device. The patient was therefore treated with intravenous antibiotic therapy with a favourable evolution.

The placement of a new hemodialysis catheter in the left jugular vein was performed without any technical difficulty. However, the chest X-ray control showed that the left jugular catheter followed an unusually straight path (Figure 2). A chest CT scan was then performed (Figure.3). It demonstrated an unconventional mediastinal position of the catheter out of the intravascular bed at the level of the proximal portion of the brachiocephalic vein, just upstream of a 6 cm opacity. This opacity was described by the radiologist as an intravascular fragment of the tunnelled catheter removed a few days earlier. The patient was then transferred to an interventional radiology department of a university hospital for extraction of that catheter.

The removal of the mediastinal catheter was easily performed. However, due to the suspicion of the persistent fragment of the previous catheter in the innominate vein, two attempts with the use of a lasso failed to extract it as it strongly adhered to the vein wall representing a risk of major vascular rupture. Therefore, two dilations of the brachiocephalic vein were possible allowing the placement of a new left jugular catheter. 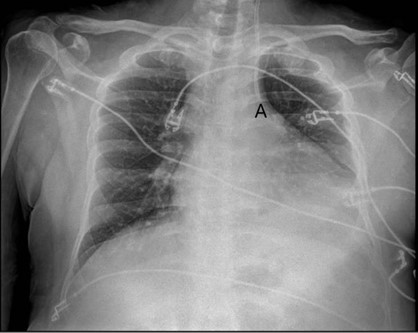 Discussion
This case report illustrates the vascular perforation by the migration of a catheter in the mediastinum, which was facilitated by a stenosis of the left brachiocephalic vein. A few cases are reported of a hemodialysis catheter perforation leading to a mediastinal position. However, an obstruction of the central venous system was the cause of this complication in only one of those cases where the autopsy revealed that the obstruction was due to an inflammation of the superior vena cava following the placement of a hemodialysis catheter days earlier. That inflammation would have diverted the new catheter path in a mediastinal position leading to a fatal hemorrhage [4]. In sharp contrast to our case report, this couldn’t have been prevented. Besides the knowledge that such a rare complication can occur, the question of prevention is mandatory.

According to the CT scan, the opacity along the left innominate vein posed the challenging differential diagnosis of:

The breaking of a catheter can happen at any moment of its life, including during the removal. In order to retrieve the fragments, the options are either surgical exploration or an endovascular approach, both with their own risks and advantages. In our case, the two extraction failures in interventional radiology excluded the possibility that a fragment of the left subclavian hemodialysis catheter positioned eight years earlier was left in place.

That phenomenon is due to the calcification of a fibrous cap when the catheters are in place for a long time (at least six years and often more) [5]. The calcification can be facilitated by parenteral nutrition, high uremia, hyperphosphatemia, and also intake of vitamin K antagonist [6]. The few reported cases warn us of the risk of incorrectly diagnosing a fragment of catheter retention leading to a useless invasive extraction procedure [6-7]. To summarize, when the X-ray shows an opacity, suggesting a fragment of the central venous catheter, the existence of a calcified catheter cast must be included in the differential diagnosis. Some authors recommend performing a chest CT scan before replacing a long-term hemodialysis catheter to detect potential calcification [6].

Thrombosis originating from a central venous catheter is a well-known complication, but calcification of such a thrombus is very rare. This complication is usually revealed by fever sometimes associated with an enema of the limb affected by the catheterization. It often occurs in long-term catheters used for parenteral nutrition infusion that facilitates for many reasons calcium precipitation. An exceptional case of per catheter calcification, facilitated by direct infusion of calcium through a thrombosed catheter was described after only twenty days of infusion [8]. The removal of the device led to a fatal pulmonary embolism.

Calcified catheter casts and thrombus may promote the development of a bacterial biofilm which may have led to the purulent discharge seen in this case [9]. Our case report illustrates three of the four late complications of a hemodialysis catheter that are: infection, thrombosis, stenosis, and perforation by erosion (the latter not being involved in our case report) [10].

Conclusion
Our case report illustrates a rare complication of the insertion of a central venous line that was facilitated by a late exceptional complication of a former long-term hemodialysis catheter. As far as we know, this is the first reported case of mediastinal perforation facilitated by venous stenosis due to a calcified per catheter cast or thrombus.
Unlike classical thrombus or stenosis caused by a hemodialysis catheter, the complications linked to calcified variants can be anticipated through a non-contrast chest CT scan. For a well-informed clinician, the highlighting of a venous opacity, at the site of a long-term catheter, should affect the rest of the patient management. Meanwhile, the injection of a contrast agent could suggest a thrombosis or non-calcified stenosis. Currently, there are no recommendations issued from a scientific society concerning the follow-up iconography of such a long-term device especially useful at the time of replacement. That topic could be the starting point of interesting research work.

Statement of Ethics: In possession of the patient’s consent to write the story and use the images.

Conflict of Interest Statement: The authors have no conflicts of interest to declare.