Copyright: © © 2021 Ibrahim Hamat. This is an open-access article distributed under the terms of the Creative Commons Attribution License, which permits unrestricted use, distribution, and reproduction in any medium, provided the original author and source are credite

X-linked Alport syndrome: A first case described in Chad in a 19-year-old patient.

Abstract
Introduction
Alport syndrome is a rare inherited disease characterized by the combination of maturating glomerular nephropathy progressing to end-stage renal disease, sensorineural hearing loss, and eye damage. It is a disease of collagen IV, the main constituent of basement membranes, linked to mutations in the genes encoding one of the three chains, α3, α4, or α5 (IV), expressed in the glomerular basement membrane. The autosomal dominant form accounts for 10-15 %, while the autosomal recessive form is rare. Its incidence is less than 1 in 5,000 individuals and is believed to be the cause of around 2 % of end-stage renal disease. The significant morbidity associated with this pathology constitutes a public health problem.

Observation:
We report the case of a 19-year-old male adolescent, 5th in a family of 8 children. he has as an antecedent an older brother, 2nd of the siblings, deceased, who had presented an edematous syndrome, visual disturbances, deafness, and uremic syndrome. this adolescent is referred to nephrology consultation for edema of the lower limb, physical asthenia, and convulsive episodes developing in a context of unexplained hyperacusis which required fitting. Her clinical examination found chronic glomerulonephritis in end-stage renal disease, bilateral conductive deafness predominantly perceptual on acute frequencies, a decline in visual acuity of 3/10, progressive cataract in the left eye, and a Lenticone anterior to the right eye.

X-linked Alport syndrome is suggested and retained in view of our patient's age, family history, renal (recurrent hematuria, chronic uremia), and extrarenal (deafness and ocular involvement) manifestations. Our patient is put on dialysis and we have opted for a transplant project.

Conclusion
The heterogeneity of the presentation of X-linked Alport syndrome leads us to systematically evoke it in end-stage renal failure in a young patient occurring in a family context of otolaryngology impairment, eye, and glomerular involvement. This diagnosis is serious because the morbidity linked to it is very heavy.

Introduction
Alport Syndrome (AS) results from a 19-century study of the same family by 3 generations of physicians Guthrie, Hurst, Alport. The first reported an observation of a family where 12 subjects, spread over two generations, had "idiopathic" hematuria. The second observed progress to kidney failure in several of the subjects with hematuria. Alport reported the frequent existence of deafness associated with nephropathy and the contrast between the severity of the disease in men and its relative mildness in women [1]. Inconsistent extrarenal manifestations: ocular lesions, macrothrombocytopenia, diffuse esophageal leiomyomatosis have been described [2–3]. Later, the discovery of ultrastructural and then immunohistochemical lesions of the glomerular basement membrane and the identification of the genes of collagen IV whose mutations are at the origin of the syndrome made it possible to progress in the understanding of the renal and extrarenal symptomatology of disease and establish that it is a genetically heterogeneous syndrome.

African literature south of the Sahara has published very little on the issue. We bring you the first case described in Chad.

Clinical observation
It was a 19-year-old male adolescent, 5th in a family of 8 children. He had a family history of an older brother (2nd of the siblings) who died in a context of edema associated with visual disturbance, deafness, and chronic uremia, and personal recurrent macroscopic hematuria. The teenager was referred for a nephrology consultation for edema of the lower limbs, physical asthenia, and convulsive episodes progressing in the context of hearing loss.
His physical examination found paleness of the mucous membranes, renal-like edema, conversational hyperacusis, and systolic hypertension estimated at 143/86 mm Hg.
The remainder of the physical examination was normal.
The urine dipstick revealed hematuria with 5 crosses and proteinuria with 3 crosses.
Laboratory tests found an alteration of renal function with a GFR at 5.9 ml/minute for a serum creatinine at 1241.4 µmol / l, urea at 21.85 mmol / l, hypocalcemia at 1.79 mmol / l, and normochromic normocytic anemia (Hb 5.9 g / dl) a regenerative (reticulocyte 0.08). The ultrasound showed small kidneys (7cm), dedifferentiated. As the renal puncture biopsy was not effective, the CT scan and electroencephalogram were not performed.
The diagnosis was hematuria chronic glomerular nephropathy in the stage of end-stage renal disease (ESRD). Faced with the signs of uremia, the patient was admitted for emergency dialysis. The first route was a femoral catheter. He had received an iso group whole blood transfusion.
During its follow-up, the otolaryngology examination found mixed deafness with an average loss of 46.25db on the right and mixed deafness predominantly perceptual on acute frequencies with an average loss of 46.25db on the left in air conduction.
Ophthalmologic examination found a reduction in visual acuity of 3/10 associated with progressive cataract in the left eye, a deformation of the lens with visual acuity of 08/10 in the right eye.
Given the personal history and death of his brother in the context of chronic uremia, the picture of hematuria glomerular nephropathy in end-stage renal failure associated with mixed deafness and ophthalmologic involvement, X-linked Alport syndrome has been retained.
The evolution is marked by the occurrence of episodes of tonic-clonic convulsive seizures with postcritical phases in per dialysis and post dialysis without localized neurological deficit. The current treatment is based on dialysis at the rate of 3 sessions per week, lasting 4 hours: erythropoietin 4000 IU twice a week, ramipril 5 mg a day, and calcium 500 mg twice a day. 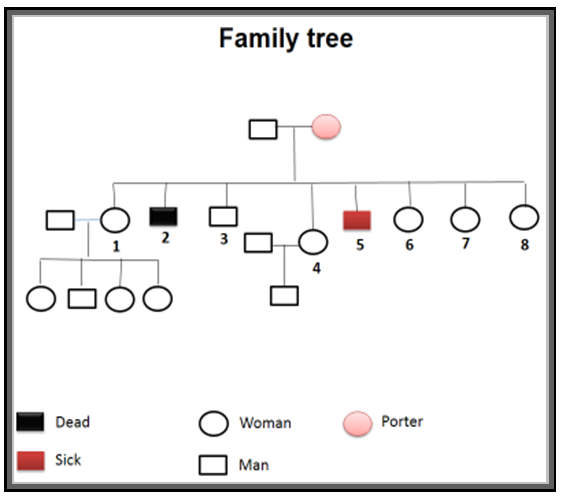 Discussion
The incidence of AS is less than 1 in 5,000 individuals and is believed to cause around 2 % of end-stage renal disease in Europe and the United States [4]. It is a disease of collagen IV, the main constituent of basement membranes, linked to mutations in the genes encoding one of the three chains, α3, α4, or α5 (IV), expressed in the glomerular basement membrane. COL4A5 mutations are associated with X- linked AS, which accounts for the majority of cases and is more severe in boys than in girls [5].
AS is an inherited condition combining glomerular damage, eye damage, and hearing loss. The diagnosis is based on three criteria: the family history of hematuria, deafness, or ocular damage either in the patient or in a family member. The renal puncture biopsy finds irregular thickening of the glomerular basement membrane with a laminated aspect of the lamina data under electron microscopy, and the genetic investigation [6].
Clinically, the frequency and specificity of the family history of deafness and ocular involvement in a family member represent 80 % [5-7]. In our case, we have the family notion of deafness and ophthalmic impairment in the older brother who died in a uremia picture. It is this symptomatic similarity that motivated the parents to take the teenager to the nephrological consultation.
Renal manifestations onset with hematuria in childhood, often macroscopic and recurrent, proteinuria, it is progressive, sometimes nephrotic, always abundant in cases of chronic renal failure [8] testify to glomerular involvement leading to ESRD before l. age 20. However, the speed of progression to ESRD varies between families, allowing for juvenile forms in which it occurs in men around the age of 20 years. In our patient, chronic glomerulonephritis and end-stage renal disease developed rather around the age of 18 years.
Extrarenal manifestations are dominated by deafness observed in about 80 % of families in males, and hearing loss occurs in half of the cases before the age of 10, which can be the source of discomfort at school. It is a sensorineural hearing loss, the involvement is bilateral, often progressive, which can lead to complete deafness [9]. Eye damage, they are less frequent but specific and concern the lens, the retina, and/or the cornea. The anterior lenticonus, or conical protrusion of the anterior surface of the lens, is observed in about 25 % of patients, most often males. It is sometimes accompanied by posterior lenticonus and lens opacities and may be responsible for myopia [10].
Our patient presented with a mixed hearing predominantly perceptual on the high frequencies with equal hearing loss. The ophthalmologic examination finds an active cataract with deterioration of vision of 3 / 10th in the left eye and deformation of the lens in the right eye.
The episodes of tonic-clonic seizures with postcritical phases in per dialysis and post dialysis without focused neurological deficit is the consequence of chronic uremia at the time of his admission which is amended after his regular admission to dialysis at the rate of 3 sessions of 4 hours per week.

Conclusion
The heterogeneity of the presentation of X-linked Alport syndrome leads us to systematically evoke it in end-stage renal failure in a young patient occurring in a family context with otolaryngology, eye, and glomerular involvement. This diagnosis is serious because the morbidity linked to it is very heavy.