Copyright: © © 2021 H Winter. This is an open-access article distributed under the terms of the Creative Commons Attribution License, which permits unrestricted use, distribution, and reproduction in any medium, provided the original author and source are credited.

The role of urgent BRAF testing and therapy in cardiac melanoma presenting with cardiovascular compromise.

Introduction
Metastatic melanoma (MM) rarely presents as a cardiovascular medical emergency, although the heart is a relatively common site for melanoma to metastasise to in patients with disseminated disease post-mortem [1,2]. Frequently asymptomatic during the course of the disease, cardiac melanoma may be associated with symptoms of heart failure, pericardial effusion, right ventricular outflow obstruction [2] and is a rare cause of superior vena cava obstruction (SVCO). Diagnostic uncertainty can arise when no primary cutaneous lesion has presented [3]. Advancements in the treatment of melanoma with dual immunotherapy (IO) and targeted therapy using BRAF-inhibitors have vastly increased survival in these patients [4,5]. The toxicities relative to IO treatment can delay or shorten treatment regimens [4,5], however, this often does not appear to impact treatment benefit [6]. Up to 98 % of patients receiving dual IO have shown some form of adverse effect (AE) from treatment with dual immunotherapy [4]. In a study of 407 patients treated with nivolumab plus ipilimumab, 156 patients (38 %) had to discontinue use secondary to severe AEs [6]. Although toxicities involved are an important factor, it is one that patients are generally content to go through if it means greater survival [7].

Case Report
A 74-year-old lady was referred via the 2-week wait pathway by the General Practitioner for a Computed Tomography (CT) scan of the thorax with contrast due to clinical signs of SVCO with breathlessness and an engorged face. The scan demonstrated extensive compressive mediastinal lymphadenopathy with complete effacement of the superior vena cava (SVC) and invading into the right atrium with pericardial effusion and bilateral pleural effusions, giving a possible diagnosis of lymphoma or less likely primary cardiac sarcoma. This was confirmed on subsequent Positron emission tomography (PET) scan 10 days later (figures 1a-c). She was assessed immediately by the local Accident and Emergency department and accepted for inpatient haematology workup. A bone marrow aspirate and pleural fluid aspirate were non-diagnostic.

On questioning there was no significant past medical history apart from mild coronary artery disease. More recently there had been a short history of weight loss and breathlessness. On examination, she was performance status (PS) 3 and required supplemental oxygen. There was facial swelling with engorged neck veins. A pigmented cutaneous lesion was identified on the left posterior forearm. Electrocardiogram (ECG) showed sinus tachycardia. Echocardiogram (ECHO) showed a large global pericardial effusion showing signs of haemodynamic compromise. After discussion with interventional radiology, a percutaneous biopsy was deemed not appropriate due to difficulty with localising the site of the tumour in relation to surrounding vasculature. Urgent histological diagnosis was obtained via cardiac biopsy (figure 2a-c) using intra- cardiac ultrasound guidance and confirmed malignant melanoma. BRAF status was requested. She was commenced on dexamethasone 4mg BD for symptomatic relief and the shortness of breath was eased with oral morphine sulphate. 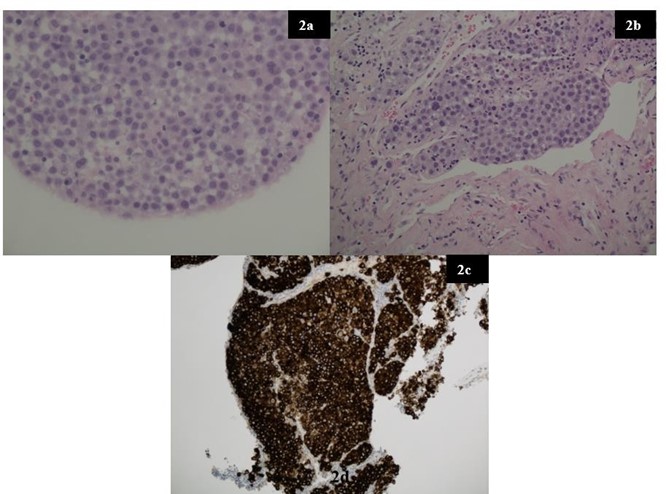 The haematology team had discussed the risks of commencing therapy with steroids when it was thought to be lymphoma due to the extensive cardiac involvement; intra-cardiac ultrasound had confirmed that tumour was present both inside and outside the SVC and going through the wall of the right atrium. Once the diagnosis confirmed to be MM, the patient was again counselled on the risk of cardiac rupture and lack of clinical benefit. The patient was started on empirical dabrafenib and trametinib pending BRAF status in view of  rapidity  of  deterioration  and  poor PS. She continued to deteriorate and the BRAF result was chased. The patient was subsequently admitted to the Cardiac Care Unit (CCU) for a pericardial drain and after developing chest pain, bilateral pulmonary emboli were confirmed, and Low Molecular Weight Heparin (LMWH) commenced. BRAF was reported as wild type (wt) on day 8. The patient was immediately switched to dual IO with full dose nivolumab and ipilimumab.

She tolerated the IO well and remained an inpatient for cycle 2. This was complicated by an episode of tachycardia with t-wave inversion and further investigation revealed pericardial effusion necessitating pericardial window. She improved symptomatically and was discharged on Day 18 of cycle 2 off oxygen and PS 2. Outpatient pre-assessment for cycle 4 revealed a typical grade 2 IO-related rash and symptoms suggestive of IO-related colitis. Biopsy results from endoscopy showed moderate acute inflammation (figure 3). 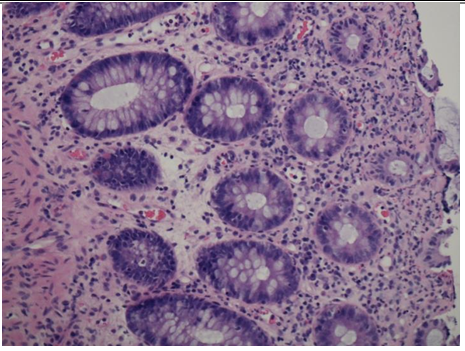 There was accompanying IO-related hepatitis with an ALT rising to 333U/L. Symptoms responded well to IV methylprednisolone (1mg/kg) and the patient was discharged on oral prednisolone. A restaging CT scan was performed, showing complete resolution of the cardiac tumour (figure 4a/b); however, a CT head showed a possible vascular lesion in the cerebellum. MRI head with gadolinium was done as an outpatient showing 4 haemorrhagic brain metastases. These were treated with gamma knife radiosurgery. Maintenance single-agent immunotherapy is planned.

Conclusion
This case highlights MM can mimic other high-grade malignancies such as lymphoma or sarcoma tumours. Achieving a rapid diagnosis via tissue biopsy remains the gold standard. Urgent BRAF status is imperative in patients presenting with urgent life-threatening MM. Turnaround times (TAT) for BRAF testing with optimum equipment can be as little as 90 minutes [8]. There are several techniques in production for quicker TAT with variable specificity and sensitivity [9]. The literature has shown good detection with the Idylla (Biocartis) mutation test, using real-time- PCR, in just 90 minutes it assesses a comprehensive spread of mutations that would show response to BRAF inhibition [8]. There are other PCR, monoclonal antibody, and immunohistochemistry tests also on the market which detect BRAF mutations more specifically at the V600E, the most common mutation [8,9]. Although DNA sequencing remains the gold standard due to detection parameters [8], it is useful to have companion diagnostics for faster detection. In a rapidly deteriorating patient where BRAF inhibition could prove beneficial with a quick reduction in tumour size, it is reasonable to treat with this prior to status reporting [10]. There is evidence however that treating a subset of wild-type patients with BRAF-inhibitors runs the risk of paradoxical acceleration of tumour growth [11]. Delays in appropriate treatment here show that empirical BRAF inhibitors could be avoided if more rapid TAT were available. A local rapid BRAF-testing process has since been introduced in feedback from this case. Indications for urgent BRAF testing include cardiac compromise, spinal cord compression and high burden hepatic or brain metastases.

Alternatively, dual IO can be used but typically takes up to 9 weeks for response [6]. Expert cardiology guidance regarding complications of metastases to the heart is crucial to survival in such patients; with risk of pericardial effusions, AV nodal block, and fatal arrhythmias all complicating treatment [12,13]. CT scanning was inadequate in showing an accurate representation of this kind of tumour; this case demonstrated the use of intra-cardiac ultrasound as an interventional tool which enabled better visualisation of the extent of the tumour, allowing for more accurate biopsy. There is limited evidence of this imaging modality with biopsy of intra-cardiac masses in the literature and is primarily confined to small case reports [14]. In terms of quality of life, patients will often accept the likelihood of toxicity related to IO if it means even a few weeks extra of life expectancy [7]. The overall quality of life, in this case, was vastly improved, with the eradication of symptoms of SVCO and an extended life expectancy in the setting of dual IO.