Copyright: © © Janos Vincze 2020 This is an open-access article distributed under the terms of the Creative Commons Attribution License, which permits unrestricted use, distribution, and reproduction in any medium, provided the original author and source are credited.

The Biophysical Modeling of the Living System

Abstract
Main characteristics of living organisms are motion, excitability, reproduction, adaptation, inheritance, changeability, growth, and development. Living matter is a complex highly-structured system which can sustain the complex structure only by means of continuous work – through metabolism work done to prevent the increase in entropy. The two basic functions that make survival of the living matter are the energy-releasing processes and biosynthesis: metabolism. The functioning of the living systems without exception is based on the use of chemical energy, hence they must have chemical “motors” capable of a continuous use of energy through some chains of autocatalytic cyclic reactions.

Introduction
Of the 92 elements from Mendeleev’s periodical table, over 60 of them have been found in living organisms. In terrestrial organisms: oxygen forms 70 % of their mass, carbon – 18 %, hydrogen 10 %, calcium, nitrogen, potassium, and silicon a few tenths of percentage, phosphorus, magnesium, sulphur, chlorine, sodium, aluminium, iron – a few hundredths of percentage.

The four main chemical elements which enter in the composition of living matter: carbon, hydrogen, oxygen, and nitrogen are found abundantly on the surface of earth where the biosphere developed.

There 13 elements form together 99,99 % of the entire mass of the organism. The feeble difference up to 100% is due to the presence of oligoelements, which are given an important role today [1].

Some secondary criteria
Motility
Research on the human locomotion has been performed by Borelli (1682). but the scientific determinations in human kinematics start with Marey in the year 1860. The chronophotographic method used by this French physiologist consists of taking a series of instantaneous photographs at equal and small intervals.

Excitability
The concept of excitation was introduced in medicine by J. Brown in his book „Elementa medicinae” (1778), as a fundamental property of living matter. The modern biophysics concept constitutes a synthesis of molecular biology data and contemporary electrobiophysics. The excitation is in this concept a primary functional manifestation inside the cellular membrane. Secondary, there are cytoplasm processes taking place: contraction, secretion.

Due to this unequal repartition of ions, the cellular membrane is “polarized”, with a potential difference of 70-80 mV for the nerve and muscular cell.

Generally, the excitation is correlated with a local modification of the membrane potential; but if the depolarization is intense, it “propagates” and the electric features of the membrane of the entire cell change. The action current appears with a quite complex aspect.

Through recordings of the action potentials – EKG, EEG, EMG, ERG – in various conditions: today one can investigate successfully in the experimental research the excitation processes in the main living structures. The data supplied through these biophysical methods are used in the medical diagnostic.

Adaptation
The organisms must adapt their function and structures to the changing and renewing realities of the environment every moment during their entire existence, thus obtaining their preservation as beings, as populations, as species.

The adaptation concept can have a narrower sphere, including only the functional, biophysical and anatomical modifications; in a wider meaning, the sphere extends to everything that represents changed functions and structures, which allow the development of life, even in extremely unfavourable environment conditions, until non-lethal pathological alterations.

The adaptation to the environment, in the wide meaning accepted in biology is the complex defence mechanism from the solicitations determined by the changes of the environment to new existing conditions; it consist of the totality of morphofunctional modifications proper to the living organism, which finally achieve higher levels of evolution, becoming more capable of survival than in their previous phases of existence.

The man’s adaptation is tightly connected to its health state which depends, among other things, of the capability and methos of achieving the adaptation. From the point of view of public health, the adaptation to the environment is a positive result, consisting of the strengthening of the physiological functions and the proper development of bodies, while the inadaptation means disease or death.

Sexuality
Sexuality is a very characteristic process of the living organisms. In the sexual reproduction, we find two sexually polarized cells (gametes) each with a halved number of chromosomes (a single set, haploid cells) coming generally from different individuals, which merge (through fecundation) in a single egg. The egg will produce a new organism, with a complete number of chromosomes (two sets, diploid cells). This means, among other things, a certain separation and reunion of active molecules, first of nucleic acids. The chromosomal localization allowed the elaboration of cytological mechanisms of preservation, repartition, and growth of the amount of hereditary information, which had a great importance for evolution. The sexual process implies the possibility of numeric multiplication of these units. Sexuality does not have only a reproductive biological function, but it has others as well: multiplicative, fortifying, selective, diversifying.

Aging
What is aging? The main theories about aging are biophysical, cellular, tissue related, visceral and humoral.

Cellular theories explain aging by: chromosomal alterations, alteration of the nucleus – plasma ratio, the hindering of nucleus – plasma changes, the decrease of the vegetative protoplasm through differentiation and accumulation in paraplasm, alterations in mitochondria, in ribosomes and centrioles. Tissue related theories applicable to pluricellular organisms make the biological insufficiency (on behalf of wear) of a certain organ, system or tissue responsible for the aging of the entire organism.

In a broad biological perspective, death and aging itself are an indispensable condition of the evolution of life on earth, making “room” to the repeated development of the competition between individuals and the repeated selection of the most qualified ones.

Metabolism – Fundamental Criteria
The most important characteristic of living matter is represented by the exchange of substances between organism and the environment. The adaptation of organism to the life conditions is realized mainly by the adaptation of metabolism. The environment is an indispensable condition of life (the organism is an opened system), but it is also a continuous threat of the integrity of the living structural integrity [2].

Knowing the biophysical and biochemical regulation leads amongst others – to an even wider conception about the functions of the metabolism in the living organism. Classically, it is admitted that the metabolism can be constructive (plastic) – leading to neoformation of living matter or the formation of necessary structures in the architecture of organisms (skeleton, cellulose membrane etc.) [3]. It can also be energetic – leading to the freeing of the necessary energy for various vital functions and for synthesis. Within the energetic metabolism there is the synthesis of compounds which embed the chemical energy (ATP, glycogen, fats etc.). But the metabolic activity also includes processes which are essential for the defence from the environment and the substance transformation leads also to important chemical products for the adjustment of the organism, for insuring its best functioning conditions (adaptation metabolism) [4].

Metabolism represents a form of matter circulation in nature. The circuit of the matter in the living world is characterized by the fact that during the cycles of the various elements (C, O, N, P, S, Ca etc.) the filogenetic evolution of the organism also takes place, leading to new types of metabolism, hence it changes the details of the matter circuit [5].

The metabolism is the basic limit criteria between the structure of the unloving and living organism; if a living structure does not show any form of metabolism, then it loses its viability.

Modelling of the Living Structure
The functioning of the living systems without exception is based on the use of chemical energy, hence they must have chemical “motors” capable of a continuous use of energy through some chains of autocatalytic cyclic reactions. This model was elaborated by T. Ganti [6,7] modified and integrated by J. Vincze [8].

where: A – the totality of substances necessary for the maintenance of reaction cycle

B – totality of the other reaction products

The concentration flows can be calculated from the following minimal system (n = 5) of differential equations: 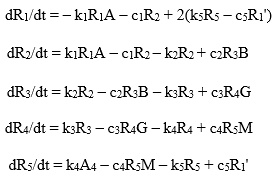 Next, we will show that the cycle of this regenerative autocatalytic reaction characterized by this system of differential equations represents a model which stimulated certain criteria of life. The simulation of the metabolism emerges obviously from the expression of the gross reaction, since the cycle consumes permanently substances

The gross equation of the auto reproductive cycle simulates acceptably the metabolic processes. The components of the cycle (R1, R2, ..., Rn) together with the substances necessary to each step (A1, A2, ..., An) can regenerate the thread of their own elements, next to which other products result as well. (B1, B2, ..., Bn):

Writing the following case of the gross general equation:

We see that in the presence of all the exogenous substances (A), all the elements of the reactions cycle (Ri) double, namely they reproduce

forming at the same time a series of secondary products. Hence, there was a quantitative variation of the system, called growth.

We decompose the equation above in n steps:

This synthesis is possible during the cycle because there was no constraint for Wi. If the cycle repeats the second time, then it starts from 2R1 it auto reproduces again, doubling, reaching fourth times the initial value. It means that after k retakes the system will increase by doubling: 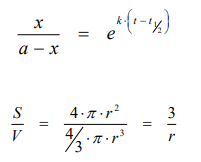 If the ray grows to double, then the S/V volume drops to half. It seems to be an acceptable quantitative argument in favour of the conception when the surface cannot maintain cells, this moment the cell divides, the new cells increase at their turn, then they divide, and so on.

According to the biostructure model, the surface of the membrane (St) in the t moment is:

Assuming that the cell is spherical, then from the growth of the surface it results that the volume variation in the t moment will be:

where: r0 – is the initial ray from the moment t0. Thus, to the double cellular volume does not correspond a double surface, but a smaller one, since the volume varies proportionally with the cube of the ray and the surface only with the square of the ray [10]. The reproduction is the capacity of living systems to generate descendants like them. It ensures the perpetuation of the species dispite the individual life and at the same time it is the link between the following generations.

Epilogue
Biology is nowadays chiefly an experimental and descriptive science. It has no theory by which it could describe qualitatively and quantitatively biological processes, the reactions of cells, multicellular organisms, biocenoses, or of the entire biosphere upon external or internal effects. Hence the creation of an exact theoretical biology is a foremost task. This must be an exact biological model system having exactly determinable properties so that the actual biological phenomena may be approximated by it with the necessary preciosity [11].  Indeed, the elaboration of an exact theoretical biology is the precondition of the designability of biological processes. Needless to say, how important this planning is in view of environmental policy, public health, demography, provisional policy and scientific research alike. The possibilities for developing a potent theoretical biology are provided today. However, doing it effectively depends not only on the biologists. Organizers of scientific research and governments share in this responsibility with biologists.