Copyright: © © 2020 Zewde GT. This is an open-access article distributed under the terms of the Creative Commons Attribution License, which permits unrestricted use, distribution, and reproduction in any medium, provided the original author and source are credited.

Hypertension clinically defined as a blood pressure of 140/90 mmHg or more on at least two readings on separated time. It is one of the most prevalent non communicable diseases and the most important preventable risk factor for premature death worldwide, due to heart disease and stroke. It is the most important modifiable risk factor for coronary heart disease, stroke, congestive heart failure, end stage renal disease and peripheral vascular diseases

Objective
To assess the prevalence of hypertension and its associated factors among bank workers in Harar town, Eastern Ethiopia 2018

Methods and material
Institutions based cross sectional study was conducted on 149 Bank workers in 6 governmental and 19 private banks which were found in Harar Town. Sample was allocated proportionately, and study participant was selected by simple random sampling. Collected and checked data were entered into Epi Data software version 3.02 and exported and analyzed using SPSS version 21. Descriptive statistics were used to determine prevalence such as frequency, percentage, mean and ratio. Both Bivariate and multiple logistic regressions were used to observe the association between the outcome variable and associated factors. P value less than 0.2 in Bivariate analysis was transferred to multivariate analysis and P value less than or equal to 0.05 was considered as level of statistically significance.

Result
The prevalence of hypertension on this study was 27.5 %. Among study participant 6(4 %) had diagnosed with hypertension and only 3 (2 %) had on treatment and follow- up. 26(17.4 %) bank workers BMI Was obsessed. In multivariable logistic regression analysis Age, Sedentary lifestyle and BMI of bank workers had significant association with hypertension.

Conclusion and recommendation
The prevalence of Hypertension in the study was 27.5 % Age, Sedentary lifestyle and BMI (Obesity) in this study was positively associated with higher odds of having hypertension. Regular blood monitoring, conducting physical exercise and reduction of Alcohol consumption and street Treatment care and follow-up strategy need to be maintained.

Introduction
Hypertension clinically defined as a blood pressure of 140/90 mmHg or more on at least two readings on separated time. It is one of the leading causes of global burden of disease. It is being the root cause of many of the body system and organs failure remains to be a major public health challenge globally [1]. It is one of the most prevalent non communicable diseases and the most important preventable risk factor for premature death worldwide, due to heart disease and stroke [2] Hypertension is the most important modifiable risk factor for coronary heart disease, stroke, congestive heart failure, end stage renal disease and peripheral vascular diseases [3].

Significance of the study: The study will describe the current situation of HPN in among bank workers in Harar town and it will be helpful for sampled population to know their BP status and for early linked to health institution to management if they have HTN. It will also be important for concerned bodies for prevention and management of hypertension. It will be serving as a base line data for other researchers.

Objectives
General objective: To assess the prevalence of hypertension and its associated factors among bank workers in Harar town, Eastern Ethiopia 2018

Methods
Study area and period: The study was conduct in Harar town. Harari region is located in eastern part of Ethiopia, 525 km away from Adiss Abeba capital of Ethiopia. In the region there are 6 governmental and 19 private banks with a total of 25 branches was found. And the total numbers of bank workers were 313, of which 142 were found in governmental and the rest were found on private. The study was conducted from January 12-18/2018 G.C.

Sample size determination
Sample size was determined by using a single population proportion formula by assuming 5 %  marginal error and 95 % confidence interval (∂ (alpha) = 0.05) and prevalence of  hypertension, which was 19.1 % from study conducted in Addis Abeba [9] and the sample become 237. After calculating finite population correction formula and adding 10% non-response rate the final sample size will be come 149.

Sample technique and procedure
Sample was allocated for each private and governmental Banks based on their number of workers. Simple random sampling was used to select study participants. 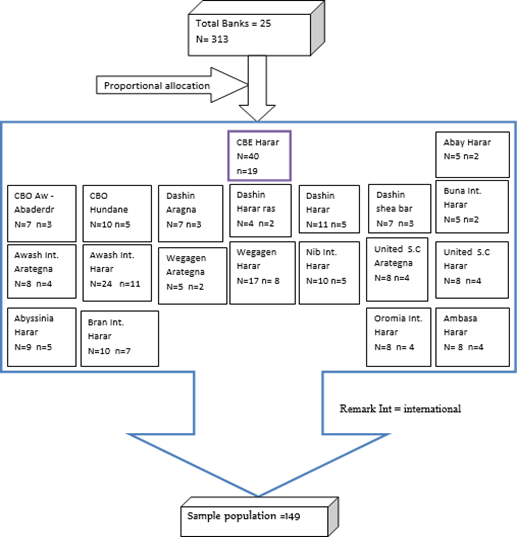 Data collection tolls and method
A semi- structure questioner was developed by English version after literature review, and it was translated into local language and return back to English version to check its consistency. The questioner had 4 parts socio-demographic, Medical History, Hypertension risk assessment and measurements parts. Data was collected by face-to-face interview and objective data was selected through measuring height, weight, Blood pressure and BMI also calculated.

Data Processing and Analysis
After data collection, data was cleaned, tabulated, rearranged and checked for its completeness and consistency and it was analyzed using SPSS version 21.0. The descriptive statistics was used to determine prevalence such as percentage, frequency and mean. Bivariate analysis was used first to determine the association between dependent and independent variable and Multiple logistic regression analysis were used for better prediction of determinants and to reduce bias due to confounders. Variables with P-value less than 0.2 in Bivariate analysis were entered into multiple logistic regression analysis and P - value less than 0.05 was declared as statistically significant in the final model.

Data Quality Assurance
To assure the quality of the data, properly data collection instrument was developed and pretest on 10 % of the total sample and amendment was done based on it. Questionnaires were translated into local language and training was given for data collector’s supervisor and data entry clerks prior to the study. Every day, the collected data was reviewed for completeness, consistency and legibility. Supervision was frequently made by the supervisors and principal investigator

Ethical Considerations
Ethical clearance letter was obtained from Harar health Science College Institution Research Ethics Review Committee. Permission was obtained from study institution. All the participants were informed about the purpose, advantages and disadvantages, and there right to be involved or not as well as withdraw any time. Informed consent was obtained from all articipants. Confidentiality was maintained by avoiding names and other personal identification.

Operational definitions
Sedentary lifestyle
A type of lifestyle with little or low physical activity, sitting or lying while reading, socializing etc or using mobile phone / computer for more than 4 hours per day.

Normal work schedule: Participants who work within 8 hours per day.

Current daily cigarette smoking: is a person who smokes cigarette one or more days per week.

Blood Pressure Measurement: Collecting of data by using mercury sphygmomanometer twice with ten-minute difference from different hand while the participant was seated. 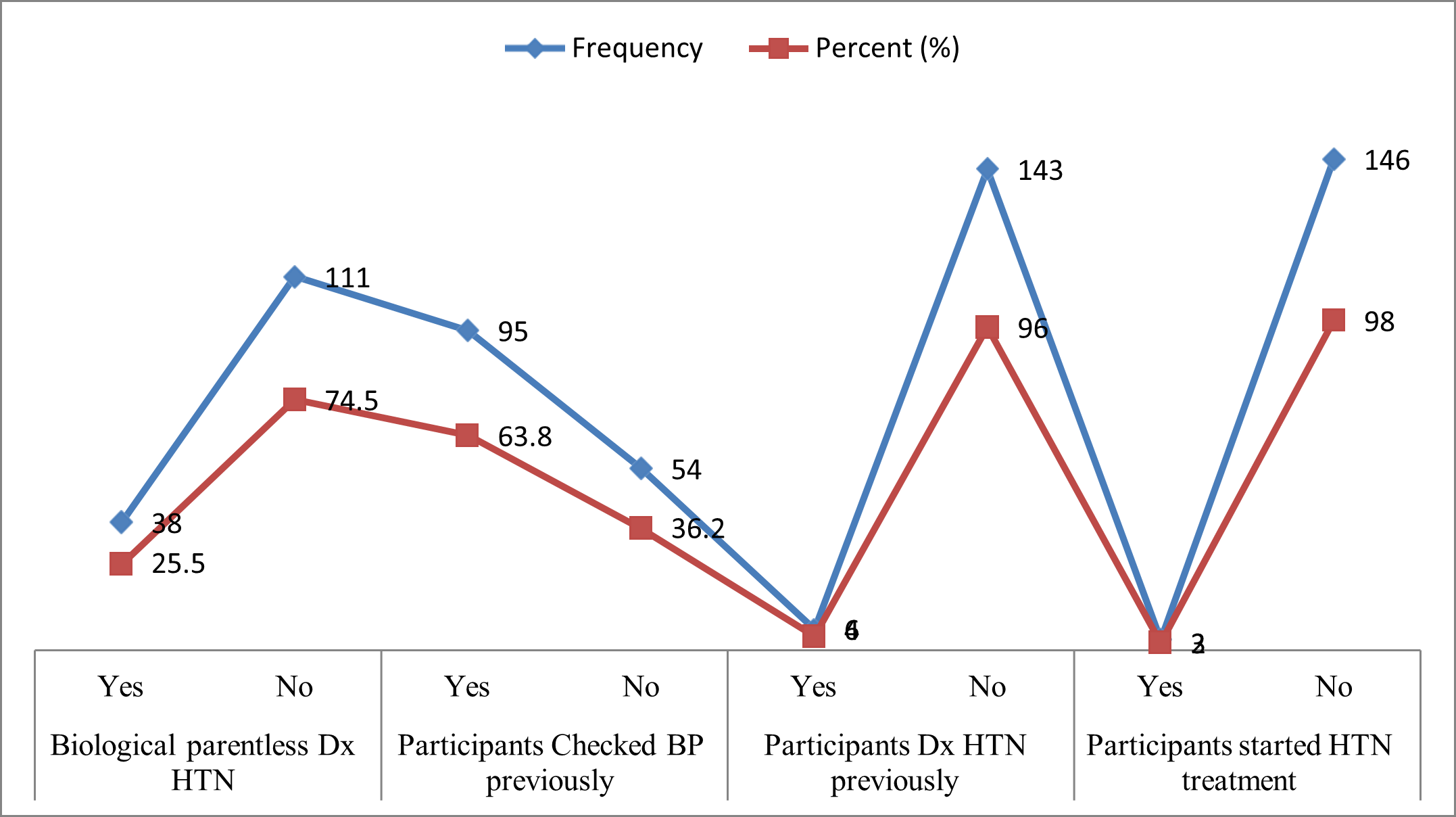 Behavioral and work-related characteristic
From total of participants responding, Forty- nine (32.9 %) of participants drunk alcohol. Eight (5.4 %) were lifetime smokers. Majority of the participants 105 (70.5 %) used /added salt to food without tying. Ninety (60.4 %) of participant were involved in physical activity and 39 (26.2 %) stated that there was conduct exercise every day. (Table 2) 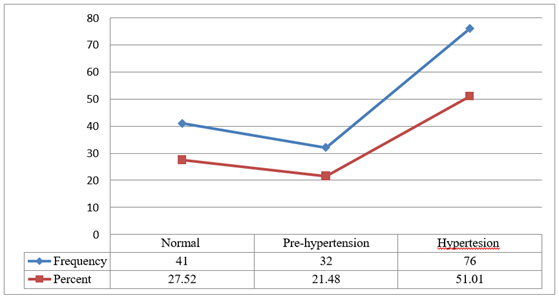 Discussion
In this study the prevalence of hypertension was, 27.5% the finding was greater than study done in Owerri Nigeria which was 12.4% [10] and Addis Ababa the prevalence was 19.1% [9]. This discrepancy may be due to different age category of participants as well as BMI and socio-cultural variation. But the study outcome is less than the result of study done among bank workers in Surratt city of India which was 30.4 % [11] and Ghana 38 % [12]. The difference occurred possibly due to different in socio demographic and socio-cultural as well as  lifestyle and mean value different in BMI. The study found that age of bank workers was      significantly   associated with Hypertension. Those age 24 – 45 were 75.8 % less likely had hypertension than bank worker who’s their age was less than 24 years. But study conducted in Adiss Abeba on federal ministry civil servants showed that increased age was identified as a factor for hypertension. Study participants older than 48 years were more likely to be hypertensive than those less than 27 years [13] and study of bank employees of Surratt city in India also showed that age ≥ 50 years increase the risk of hypertension [11]. Even if the age associated to had hypertension there is different in association of age categories. The variance may be due to having more sedentary lifestyle in our study.  In this study the risk of being hypertensive was 3 times more likely among bank workers who had sedentary life style this finding was in line with study conducted in Surratt city of India 2 times more likely [11] and Ghana Accra. This shows that sedentary life decrease energy expenditure and increase cholesterol level in blood vessel which directly related with Cardio vascular disease i.e. Hypertension. BMI of bank workers significant association with Hypertension, in this study obese bank workers were 6 times more risked for hypertension this finding also in line with study conducted in Adiss abeba which is obese were 7.36 times more likely to be hypertensive and in Sullia Taluk, Karnataka also obesity was strongly associated with hypertension [14].

Conclusion
The prevalence of Hypertension in the study was 27.5 % which shows the high prevalence of hypertension in the study population. As in many other developing countries hypertension is becoming a serious public health concern among working bankers in Harar town, Eastern Ethiopia. Age, Sedentary life style and BMI (Obesity) in this study was positively associated with higher odds of having hypertension. However, Sex, Marital status, educational level, Job description, alcohol drinking, smoking, salt usage, physical activity and working schedule had not associated with hypertension.