Copyright: © © 2021 Juzaily Fekry Leong. This is an open-access article distributed under the terms of the Creative Commons Attribution License, which permits unrestricted use, distribution, and reproduction in any medium, provided the original author and source are c

Abstract
Introduction
: Patients who sustain an osteoporotic fracture are at increased risk of sustaining another fracture hence efforts are directed towards secondary fracture prevention. The aim of this study was to identify the osteoporosis care gap in patients admitted with fragility fractures in University Kebangsaan Malaysia Medical Centre (UKMMC).

Methods: Patients admitted to a tertiary care hospital with fragility fractures were identified from the admission registry from January 2016 to December 2016. The demographic data and drug prescriptions related to osteoporosis treatment were obtained upon discharge.

Introduction
Osteoporosis is defined as deterioration in bone and architecture resulting in weakness of the bone, which is then prone to fracture. It is one of the major non-communicable diseases, accounting for 0.83% of the global burden worldwide [1]. The prevalence of osteoporosis and its consequences (i.e fragility fractures) is increasing worldwide in parallel with global population aging. Patients, who sustain a fragility fracture after the age of 50 years are at higher risk of getting subsequent fractures by 2- to 9- fold [2].

Efforts and measures should be taken to prevent subsequent fractures as these are associated with a greater increase in mortality rates and a significantly higher cost. International guidelines for secondary prevention of fragility fractures are available, which include pharmacological therapy to treat osteoporosis and giving supplements to promote bone health [3]. Medications are now available for the prevention and treatment of osteoporosis. These are known to have a beneficial effect on bone mineral density (BMD) and reduce the risk of fracture [4]. Other methods include assessing osteoporosis, strategies for fall prevention in the elderly, and avoiding tobacco and excessive alcohol intake.

Method
This was a retrospective review of hospital records of patients treated in a tertiary care hospital with fragility fractures from January 2016 to Dec 2016. Patients above 49 years of age and sustained hip, wrist, or vertebrae fractures following a fall from standing height (fragility fracture) are included. Diagnosis of patients was obtained in admission records from orthopedic wards. The demographic data such as age, gender, ethnicity, and drug prescriptions related to osteoporosis treatment were obtained upon discharge and on follow-up, up to 6 months after patients sustained a fragility fracture. A patient who has a bone mass density (BMD) scan requested within 6 months after diagnosis was also recorded from their appointment records in the hospital computer system.

Figure 2: Age group distribution by number within each gender 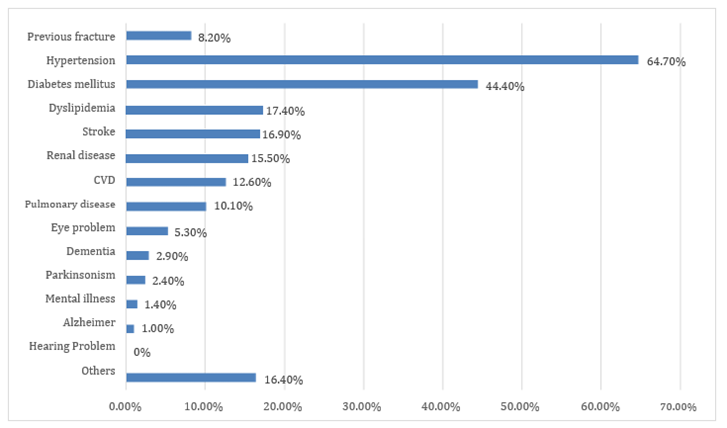 Discussion
In this study, the majority of patients who sustained fragility fractures were female (58.9 %). According to the International Osteoporosis Foundation (IOF), about 61 % of osteoporotic fractures occur in women with a female-to-male ratio of 1.6 [1]. This is due to the rapid decrease in bone density occurring after menopausal and leads to osteoporosis [7].

The predominant age group for hip fracture in this study was with a mean (SD) age of 73.0 (10.7) years. The average life expectancy of Malaysians has increased from 73.3 years in the year 2009 to 75.0 in the year 2016 [8]. Fracture risk increase with each fragility fracture and aging. Studies of hip fracture by Lee JK et al and Isnoni I have reported that Chinese is the most affected ethnic group followed by Malay and Indian [9,10]. This correlates with our data and similar trends were seen in vertebrae and wrist fracture with Chinese predominantly affected. According to the National Population Census, in the year 2016, the majority of our population are Malay (68.6 %) followed by Chinese (23.4 %), Indian (7.0 %), and other ethnic (1.0 %).

Osteoporosis and many chronic diseases are associated with aging. The risk of falling increases with the presence of relevant chronic diseases, such as stroke, arthritis, depression, and diabetes. The chronic diseases that contribute to the risk of recurrent falls after the first are heart attack, angina, stroke, asthma, COPD, CKD, arthritis, depression, and diabetes [11]. In our present data, diabetes (44.4 %) is the second most common comorbid among fragility fracture patients. While the history of the previous stroke (16.9 %) and cardiovascular disease (12.6 %) are the 4th and 6th most common comorbid among patients. Although there is no data suggesting hypertension and dyslipidemia as risk factors of fall, these two are major risk factors to develop cardiovascular disease and cerebrovascular disease, indirectly increase the risk of future fall. Hypertension (64.7 %) and dyslipidemia (17.4 %) are the first and third most common comorbid among our data. The majority of our patients are at risk of falls and recurrent falls.

Guidelines from the National Osteoporosis Foundation (NOF) in 2014 recommended that adults who sustained a fracture above the age of 50 should have BMD [12]. In our study only about 13 % of patients with fragility fracture have BMD. A review of international studies reported only 1 % to 32 % of patients had their bone mineral density scans [13]. Another similar study by Kung et al that looks at post-menopausal women in Asian countries who had fragility fracture reported that only 28.2 % of them had BMD measurements [6]. A study by Angthong et al in Thailand also reported that only 38.2 % of patients underwent BMD testing [14]. BMD testing is important in diagnosing osteoporosis and predicting the risk of getting fractures in the future. In our study, the rate of BMD testing among patients was also low and this can be contributed due to a lack of general awareness. A study by Zaris et al has revealed the awareness and knowledge of the public regarding osteoporosis are low, despite age, gender, and level of education [15]. This might be observed among doctors for not correlating fragility fracture with osteoporosis and reducing the rate of BMD testing.

Advise of adequate intake of calcium and vitamin D daily should also be given to reduce the risk of sustaining a fracture in the future and this can be achieved by increasing their dietary intake or by giving supplements to the patients. Just over half of the patients were prescribed calcium and vitamin D in our study, in comparison with Gian Gregorio et al study which reported that only 2 % to 62 % of the patients in 10 Western countries were prescribed similar supplements [13] Thus, it can be said that our survey results are comparable to western countries with advanced medical care.

A multidisciplinary team approach has been recommended to manage patients with a fragility fracture and improve osteoporosis management thus preventing secondary fracture. International Osteoporosis Foundation has introduced a worldwide program ‘Capture the fracture’ where the hospital can implement Fracture Liaison Service (FLS) to tackle this problem. Bogoch et al. also argued that the role of orthopedic surgeons is not limited to only treating the patients with a fragility fracture, but they should also ensure that actions are being done to prevent subsequent fractures [16].

Conclusion
The persistent Osteoporosis care gap still exists for people suffering from fragility fractures. An increase in awareness among the doctors and improvement in the management of osteoporosis need to be emphasized to reduce secondary fractures which can lead to further morbidity and mortality in patients. One of the ways to improve this is to set up Fracture Liaison Service in our hospital setting as recommended by International Osteoporosis Foundation.