Copyright: © © 2021 Foteini Biskanaki. This is an open-access article distributed under the terms of the Creative Commons Attribution License, which permits unrestricted use, distribution, and reproduction in any medium, provided the original author and source are cre

Non-Melanoma Skin Cancer (NMSC) and Collagen Type VI: Histological study of the Damaging Effect of Solar Radiation on the Dermis

Abstract
Background: Collagen type VI (Col VI) affects the microenvironment of tumors by increasing the mobility of macrophages and endothelial cells, thus promoting tumor inflammation and angiogenesis. Malignant cells of melanoma and other cancers are influenced Col VI by enhancing the production of primitive factors and causing epithelial-mesenchymal transition. The aim of this study was to investigate the expression of Col VI in NMSC.

Methods: Immunohistochemical study of 76 cases: 25 BCCs, 13SCCs, and 38 healthy individuals’ human skin that was used as controls. The diagnosis was confirmed by H&E and they were stained immunohistochemically with the rabbit monoclonal Anti-COLVI antibody. The results of ICH were analyzed (Olympus BX 41 microscope), scored positively (weak +, weak to moderate ++, moderate +++, moderate to severe ++++, and severe +++++), and statistically analyzed with the Rapid Miner Software.

Results: The results of this study showed the increased expression of Col VI in NMSC when compared to those of healthy controls.

Discussion: It has been reported that differential expression of Col VI may represent a promising diagnostic and prognostic parameter. The recent literature is lacking in studies for NMSC and Col VI expression in the dermis. This is the first report and according to our findings, Col VI is still a promising open field of research that may provide new targets for cancer therapies in the future.

1. Introduction
Collagen VI (Col VI) is nonfibrillar collagen expressed in many connective tissues and implicated in the extracellular matrix (ECM) an organization with a critical role in maintaining skin integrity and function [1]. Col VI exerts several key biomechanical roles and cytoprotective functions indifferent cells [2]. These include counteracting apoptosis and oxidative damage, favoring tumor growth and progression, regulating autophagy and cell differentiation, and even contributing to the maintenance of stemness [3]. Skin cancers represent the most common type of cancer worldwide. Non- melanoma skin cancer (NMSC) refers to a group of cancers that slowly develop in the upper layers of the skin [4]. The term non- melanoma distinguishes these more common types of skin cancer (99 % are basal cell carcinomas, BCCs) and squamous cell carcinomas (SCCs) from less common skin cancers such as melanoma [5]. SCC is characterized by a typical proliferation of invasive squamous cells, which can metastasize. In addition, SCC shows considerable potential for recurrence, which depends on the tumor size, degree of histological differentiation, depth of the lesion, perineural invasion, patient’s immune system, and anatomic localization [6]. 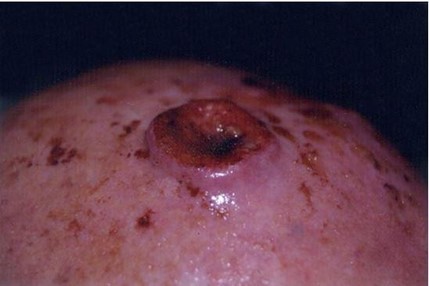 BCC is characterized by cells that resemble epidermal basal cells and it is the least aggressive NMSC. BCC shows a low degree of malignancy, despite of the capability of local invasion, tissue destruction, recurrence, and a limited potential for metastasis. There are now known of NMSC risk factors, allowing for an effective prevention of its development [6,7]. 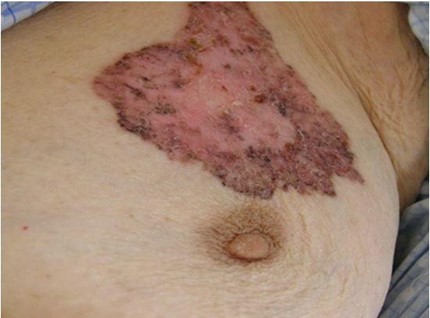 Figure 2: Superficial spreading BCC on the left breast of an elderly woman.

Differential expression of Col VI has been cited as a promising diagnostic and prognostic parameter [8]. There are also reports that promote chemotherapy resistance and may be considered a possible biomarker for cancer diagnosis [9]. The role of Col VI in melanoma [5]   and in other cancers such as glioblastoma, cutaneous neurofibromas, ovarian cancer, lung cancer, esophageal cancer, astrocytoma’s, pancreatic cancer, breast cancer, and colon cancer has been reported [3]. Nevertheless, its role and expression in non- melanoma skin cancers have not been studied. This study aimed to investigate the expression of Col VI in NMSC.

2. Material and Methods
2.1 Tissue samples
The study material included 76 formalin-fixed skin tissue samples embedded into paraffin blocks recovered from the First Department of Pathology of Medicine School of the National and The Kapodistrian University of Athens. Thirty-eight of them had been diagnosed as NMSC (BCCs = 25, SCCs = 13), and 38 samples came from healthy individuals’ human skin (n = 8 youthful skins and n = 30 chronological aging) that was used as controls. Thirty samples were from male patients and 46 were from females. The specimens were divided into 3 age groups (1st group = 66-85 yo, 2nd = 46-65 yo, and 3rd = 25-45 yo). In terms of the skin area origin of the specimens, 24 were from the face, 14 from the back, 16 from the abdomen, 22 from extremities, and the comparison was made on a uniform sample. From each paraffin block, one section was stained with hematoxylin and eosin (H&E) and one more section was prepared for immunohistochemistry by using Col VI antibody.

2.3 Immunohistochemistry microscopy analysis
The microscope slides were evaluated by using an Olympus BX 41 microscope in magnification x40 and x100. The Immunohistochemical report was performed by estimating with visual evaluation the percentage of Col VI expression on a scale of 1 to 5 positively (weak +, weak to moderate ++, moderate +++, moderate to severe ++++, and severe +++++) [10]. The study focused on Col VI's expression in three indexes. The first was between the epidermis and solar elastosis (index A), the second was along with the dermis (index B) and the last was below the lesion (index C). The results of the visual evaluation were initially stored in Microsoft Excel and followed by their statistical analysis with the Rapid Miner Software.

3. Results
The results of the specimens of the healthy, youth skins showed a uniform expression of Col VI along on the dermis (index B). In the healthy - biological aging skins its expression was uniform along with the dermis and weaker than the expression in young skin. Col VI staining confirmed that those collagen fibers were thin and loose in the papillary dermis and thicker with homogeneity in healthy skin. The statistical analysis of all NMSC specimens of our study showed that the average expression of Col VI in the dermis (index B) was moderate and, below the lesions, was moderate with an average slightly lower than the expression in index B.

Figure 4: (Α): Histochemical staining of hematoxylin-eosin in NMSC: Solar Elastosis and Squamous Cell Carcinoma (SCC) in part of right leg. (B) ICH with monoclonal Anti-COLVI. We compared the specimens with BCC and SCC, according to the body parts and the result of Col VI's expression was moderate along the dermis (avg.= 3,34 in index B) and with the highest Col VI’s expression in the hands with NMSC (avg.=4 in index B) 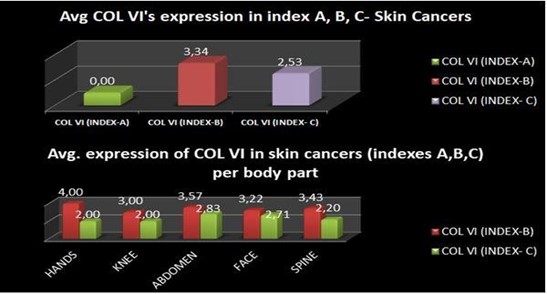 The comparison was made between the healthy samples with chronological aging and NMSC (BCC, SCC). The statistical results in uniform females’ samples (n=18) belonged in the age group 66-85 years old, showed that in the samples with healthy-chronological aging there was a weak expression of Col VI while in the skin cancer lesions the expression was moderate to severe The average Col VI’s expression below the skin lesion was almost moderate (avg. 2,53 in index C 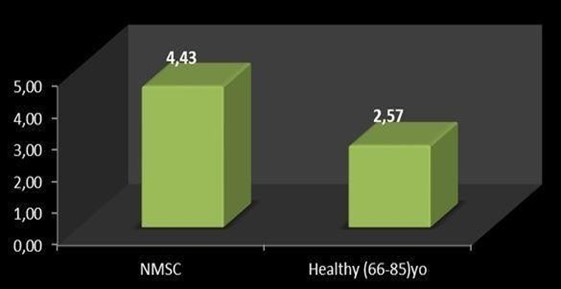 Figure 6: Uniform samples for comparison of expression of Type Collagen VI in the dermis of healthy skin and NMSC.

4 Discussion
Literature is lacking in data concerning the expression of Col VI in NMSC. In our study, despite the ages that were between ages 65 to 85 years old, this type of collagen showed a completely different distribution in the dermis of the skin cancers compared to healthy skin of the same ages. Unlike most extracellular molecules Col VI remained unaffected by the process of chronological aging in healthy controls [9] but it was increased in skin cancers. Col VI was absent in the epidermis, broad distribution in the dermis, it was particularly abundant in the basement membrane at the epidermal-dermal junction in agreement with previous reports [3]. The level of Col VI protein in NMSC tissues was much and this result agrees with previous studies concerning Col VI levels in individuals with melanoma [3]. Several studies have showed that Col VI as an ECM molecule, promotes tumor growth, tumorigenesis, and progression by contributing to at least five hallmarks of cancer, including tumor-promoting inflammation, inducing angiogenesis [1], resisting cell death, activating invasion and metastasis, and sustaining proliferative signaling [12]. It has been also reported that Col VI directly affects malignant cells by acting on the Akt–GSK-3b–b-catenin–TCF/LEF axis, enhancing the production of protumorigenic factors and inducing epithelial–mesenchymal transition [13]. The skin nerves are located mainly in the dermis and Col VI has a neuroprotective role p [14]. Col VI seems to be increased during wound healing [15]. After a skin injury, exposed elements (e.g., Col VI) in various layers of the skin, in addition to vasodilators and inflammatory chemical mediators, contribute to the formation of blood clots and attract inflammatory cells to the site of the inflammation. The above findings could be correlated with the appearance of a tumor (benign, in situ, and cancerous) which can affect epithelial vascular hyperplasia, promote the inflammatory response, and once produced in the cancer.

Furthermore, collagen VI promotes chemotherapy resistance and can be regarded as a potential biomarker for cancer diagnosis. These findings strongly support a role for collagen VI as an important regulator in tumors and provide new targets for cancer therapies [2]. It has been reported that differential expression of Col VI may represent a promising diagnostic and prognostic parameter [10].

However, our knowledge of the active role of this ECM protein in the microenvironment of the epithelial system is still limited p [16]. According to our findings, it seems that Col VI levels in NMSC are dramatically increased when compared to those of healthy controls. Nevertheless, it is still a promising open field of research that may provide new targets for cancer therapies in future.

Acknowledgements
We thank Dr. M. Adoniadi for their assistance with HCI protocol, Dr.I.Giannopoulou.
Dr. A. Stofa and Dr. V. Papadopoulo for help with bibliography & Research.

Conflict of Interest: The authors declare no conflict of interest