Copyright: © © 2021 Dante Valer. This is an open-access article distributed under the terms of the Creative Commons Attribution License, which permits unrestricted use, distribution, and reproduction in any medium, provided the original author and source are credited.

Flow diverter stent for treatment of cerebral aneurysms: A report of 24 patients with 25 Devices: aneurysms: A Single-Center Experience

Abstract
Background:
This study aims to report our experience with cerebral aneurysms, which may improve in the treatment with the flow- diverter stent and follow-up.

Methods: This study was conducted in a consecutive series of 24 patients. 25 procedures were performed for treating these patients in Clinical San Felipe, Lima, Perú, from December 2013 to September 2019. 25 flow diverter stents (Pipeline, FRED, and SILK) were used. Aneurysm morphology, stent patency, and cerebral parenchyma before and after intervention were analyzed on images of digital subtraction angiography (DSA), computed tomography (CT), and magnetic resonance (MR). The follow-up data after 6 months.

Conclusions: Flow diverters have proven to be effective in the treatment of complex cerebral aneurysms that are not easy to treat, and there are currently different types of flow diverter stents with their own characteristics and different degrees of efficacy.

Introduction
Since 1990 with the introduction of detachable coils by Guglielmo and the addition of complementary devices such as intracranial stents, balloons, endovascular therapy became an alternative to surgery for ruptured and unruptured intracranial aneurysms [1]. Large, giant, or blister aneurysms are challenging for neurosurgeons and neuro-interventional, whether by endovascular treatment or clipping. A treatment option is deconstructive surgery through carotid trapping to exclude the aneurysm from the circulation, however, requires that the patient have a good communicating system to compensate for the cerebral irrigation of the other cerebral hemisphere, with probable rates of ischemia of around 4 % to 15 %, with risk of persistence of the aneurysm. Currently, the reconstructive approach is emerging through the placement of flow diverter stents to preserve the mother artery and progressive thrombosis of the aneurysm with higher success rates [2].

During the last decades, cerebra l aneurysms have been treated with occlusion of the aneurysmal sac with coils sometimes assisted with a balloon or stent, while the use of flow diverters represents a paradigm shift by preserving and reconstructing the mother artery even being able to combine embolization with coils in the aneurysmatic sac in case of giant aneurysms to favor the thrombosis process. In this article, we review the use of the different types of flow diverters and their efficacy for treating brain aneurysms. We review the mechanism of action, the technical characteristics of the devices, and the evidence for the efficacy and safety of flow diverters for intracranial aneurysms [3]. About the mechanism of action of the flow diverters studied in rabbits (figure 1), the initial events, which occur within 1 day of the placementof the device, include the complete denudation of the endothelial cells where the device meets the mother artery, as well as the adhesion of inflammatory cells at scattered intersections of the device on the neck. The endothelialization of the mother artery is quite rapid but is delayed over the neck of the aneurysm. Endothelialization of the aneurysm neck comes from the mother artery and depends on an underlying smooth muscle cell substrate [15].

Methods
Inclusion and exclusion criteria
The inclusion criteria were patients with cerebral carotid siphon aneurysms in some cases of difficult access for craniotomy with clipping of the aneurysm and in other cases because the patient chooses to undergo endovascular surgery and the patient agreed to be treated with Flow Diverter. All patients were from the San Felipe Clinical, Lima, Peru (Table 1)

Endovascular procedure
For all enrolled patients, dual antiplatelet therapy (100 mg/day acetylsalicylic acid (ASA) and 75 mg/day clopidogrel) was given for at least 10 days before the endovascular procedure. All Flow Diverter (Silk, Fred, Pipeline) (figure 2) placement procedures were performed under general anesthesia and via the transfemoral approach. Using the preoperative road map, a Traxcess-14 micro guide (Micro-Venation, Tustin, CA) wire carried the stent catheter to the middle cerebral artery, then, we delivered the appropriate Flow Diverter through the stent catheter and released the flow diverter after satisfactory positioning covering the neck of the aneurysm (Figure 3). 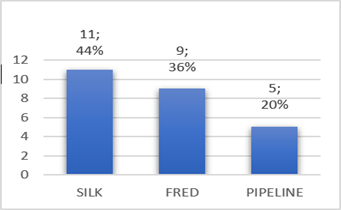 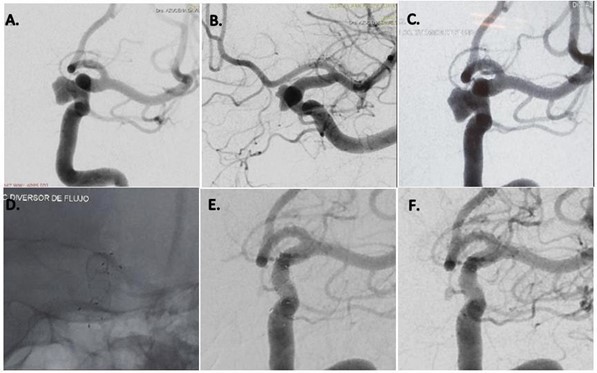 Imaging and clinical assessment
We used the O’Kelly–Marotta Scale to classify for follow-up angiographic results. This grading scale is used to evaluate aneurysms treated with flow diverter and indicates both the degree  of contrast stasis and the amount of aneurysm filling. The scale is widely used to evaluate the efficacy of flow diverter devices such as the Pipeline, Fred, and Silk devices. We defined O’Kelly– Marotta Scale C or D as a favorable outcome. Angiographic results were confirmed by at least two experienced endovascular neurosurgeons. We collected each patient’s clinical information, including whether the original symptom had improved and whether any new symptoms appeared, post-procedure.

Results
Patient and aneurysm characteristics
Between December 2013 and September 2019, 24 patients each with internal carotid artery aneurysm were enrolled in our study. Clinical presentation included headache in nineteen patients, visual disturbance in one patient, involvement of the third cranial nerve in one patient, and three patients asymptomatic. One patient had a history of subarachnoid hemorrhage (Table 1).

Angiographic follow-up results
We selected the final digital subtraction angiographic follow-up image for each patient as the time point to evaluate the efficacy of flow diverter placement. Angiographic follow-up data from 6 months onwards were obtained in only 17 patients with 21 aneurysms. All twelve (57.1 %) aneurysm obtained favorable angiographic follow-up results (eight patients’ O’Kelly–Marotta Scale grades were D, and four patients were grade C), remaining nine (42.9 %) residual aneurysms in different degrees of occlusion (Table 2). In the tree of the twenty-four patients, parent artery occlusion was seen in the 6-month digital subtraction angiographic image. The occlusion was in the flow diverter, but there was no clinical manifestation associated with cerebral infarction because the other internal carotid artery provided sufficient blood for the contralateral brain hemispheric circulation through the anterior communicating artery. We did not encounter hemorrhagic complications, and the morbidity and mortality rates were both 0 %.

Table 2: Results in the follow-up of the flow diverters according to the O'kelly Marotta scale where we observe that our average cure rate is 57.14% 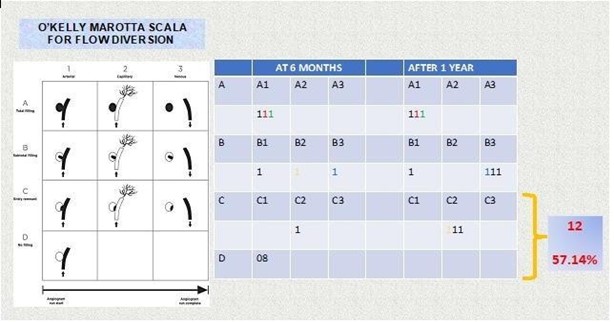 Clinical outcomes
Clinical follow-up data were available for seventeen patients from 6 months. No new neurological deficits were observed in any patient. Sixteen patients achieved a modified Rankin scale score of 0, and the remaining patient experienced improved cranial paresis of the III cranial nerve. Among our complications, we have carotid thrombosis 3 (37 %), endothelial hypertrophy 3 (37 %), distal deployment 1 (13 %), and frustro 1 (13 %) (Figure 5)

Discussion
Flow diverters are stent-like devices that are endovascularly deployed to treat small, spindle-shaped, blister-type, large, and giant aneurysms, allowing endoluminal reconstruction rather than endovascular filling; They take advantage of the change in the interface between the aneurysmal sac and the mother artery, altering the inlet and outlet jets, to induce thrombosis of the aneurysm. Intravascular thrombosis occurs within weeks or months of device deployment. Subsequent neointimal overgrowth coats the stent, rebuilding the main artery and eliminating the interface between the aneurysm and the main vessel. This process generally avoids the origin of the perforators. Furthermore, when used   for   spindle   aneurysms,   these   processes   allow   the reconstruction of a smooth endothelial-lined canal in continuation with the mother artery. This mechanism represents a conceptual shift in aneurysmal treatment from closing or deconstructing the aneurysm to reconstructing the parent vessel [4,5]. Some surgeons use flow diverters in combination with coils, especially in large and giant aneurysms to promote the thrombosis process. However, the mechanisms underlying thrombus formation within aneurysms are still not well understood, but multiple possible contributing factors have been suggested, including reduction or redirection of flow and reduction of shear stress. Numerous studies underscore the importance of stagnation and slow flow within the cavity [6,8]. Compared to small aneurysms, treating large and giant aneurysms is technically challenging, with a much higher rate of complications and recanalization. Long-term angiographic results showed that recurrence rates for large aneurysms treated with coils alone or stent-assisted coils were 57.9 % and 23.5 %, respectively, indicating that satisfactory results cannot be achieved by conventional endovascular treatment. Another valid option is the occlusion of the main artery, which can be used to treat giant aneurysms, but this requires a negative balloon occlusion test, in addition, it was observed that new aneurysms were formed in other areas in 4.5 % of patients. In treating large and giant aneurysms the goal is to reduce the risk of rupture and thromboembolism and to alleviate cerebral nerve palsy caused by the aneurysmal mass effect. In our series, angiographic follow-up data were obtained in only 17 patients with 21 aneurysms from six months, twelve aneurysms obtained favorable angiographic follow-up results. We obtained complete occlusion with flow diverter Silk 66.5 %, FRED 55.5 % and Pipeline 50 % (Figure 4). However, in 2015, Lubicz et al reported a single-center experience with the use of Silk, a complete aneurysm occlusion rate of 73 %. The European Flow- Redirection Intraluminal Device (EuFRED) and the Safety and Efficacy Analysis of FRED Embolic Device (SAFE) studies showed a complete aneurysm occlusion of 91.3 % and 73.3 % respectively. Lin et al reported that complete aneurysm occlusion was achieved in a higher proportion of the Pipeline plus coils compared with Pipeline only (93.1 % vs 74.7 %) [13]. The use of flow diverter devices theoretically does not require coiling. However, for large, giant, and complex aneurysms, additional coils could play a role in improving occlusion rates and decreasing the risk of catastrophic aneurysm rupture after the use of flowdiverter stents. Jing et al. have also reported that adjunctive coiling with the flow diverter can reduce intra aneurysmal flow velocity and wall shear stress, promoting thrombosis formation and embolization of aneurysms. In an earlier experience using the Pipeline flow diverter, Siddiqui et al recommended avoiding dense packing of the aneurysmal sac because this can lead to acute thrombotic or compressive occlusion. In our series tree patients, parent artery occlusion was seen in the 6-month digital subtraction angiographic image but there was no clinical manifestation associated with cerebral infarction (Figure 5). One meta-analysis indicated an ischemic rate after flow diverter implantation was 7.5 % [14] and a 9–10 % incidence of ischemic events should be anticipated when using flow diverters for large aneurysms [13]. Ramani et al suggests that endovascular treatment with flow diverter stents of aneurysm remnants after previous microsurgical clipping is a feasible treatment concept with a low-risk profile, which might prevent the treatment burden and risks of repeat surgery [11]. Currently, there are different types of flow diverter stents which are Pipeline (PED, Chestnut Medical Technologies, Menlo Park, CA), Surpass (Stryker Neurovascular, Fremont, CA), FRED (Microvention, Aliso Viejo, California), Silk (Balt Extrusion; Montmorency, France), p64, p48 FD (Phenox, Bochum, Germany), Derivo FD (Acandis GmbH, Pforzheim, Germany), Tubridge (Micro Port, Shanghai, China). In the last year, we have also placed five P64 flow diverter, however, it was not considered in the present study because the patient still does not have the respective angiographic follow-up due to the pandemic. 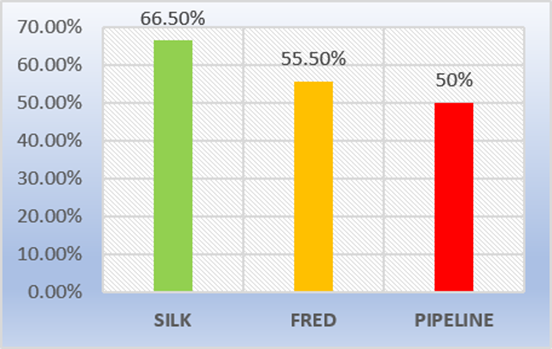 Figure 4: Degree of occlusion of aneurysms by type of Flow Diverter 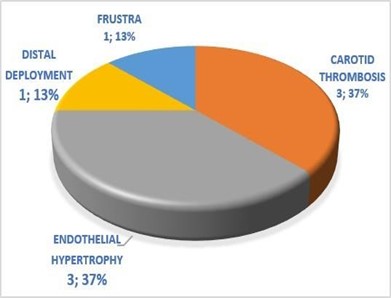 Conclusions
Our preliminary experience demonstrated that the flow diverter is a safe and effective tool for the treatment of brain aneurysms. However, in our country, randomized multicenter trials and long- term follow-up studies are necessary.

Competing interest statement: The authors declare no conflict of interest.