Copyright: © © 2021 Jin-Ichi Sasaki. This is an open-access article distributed under the terms of the Creative Commons Attribution License, which permits unrestricted use, distribution, and reproduction in any medium, provided the original author and source are credi

Abstract
Survival of enterohemorrhagic E. coli O157:H7 was studied in a water environment to know behaviours in a nutrient-poor environment. Initial cell number at 108/mL kept alive till 3 years, even though cells decreased to 104/mL, whereas control E. coli died out 2.5 years in this condition. Three years survived cells grew as colourless colonies on Rainbow Agar, but they (50 colonies) were all agglutinated with O157:H7 antiserum. Water survived cells showed elongated forms with a surface smooth in scanning electron microscopic view. Whereas control O157:H7 cells that maintained on nutrient agar produced black colonies, and cells length were 2-3μm. Survived cells were less Stx producibility. On Stx IP animal tests O157:H7 toxin bound to liver and kidney cells, along with severe haemorrhagic intestine.

Introduction
Hemorrhage E. coil O157:H7 was first reported as a pathogen in 1982 during an outbreak investigation of hemorrhagic colitis [1]. The first unprecedented massive outbreak caused O157:H7 in Japan was occurred in May 1996 at the elementary school Okayama Prefecture south part of Japan, including 486 school students and two deaths [2]. The onset of EHEC 0157:H7 infection is bloody diarrheal stool and proceeds to the development of hemolytic uremic syndrome (HUS) caused by Stx toxin, and some of them are led to death. Thereafter EHEC 0157:H7 infection was gradually moving up to the north and ended at Hokkaido in autumn leaving big sacrifices in Japan. Health Center inspection made reports that the bean sprout salad served in school lunch was the most suspicious causative agent, but definitive evidence was not obtained [3].

EHEC 0157:H7 caused food poisoning was very rare till then in Japan. After this historical large outbreak, EHEC 0157:H7 food poisonings were successively reported each year in our country, suggesting EHEC 0157:H7 agent settled down and contaminated in nationwide area, but we lacked information of O157:H7 behaviours how they were surviving in a natural environment.

Under these situations experiments were designed to focus on EHEC 0157:H7 behaviours in water environment to gain fundamental knowledge, comparing to non-pathogenic Escherichia coli.

2. Materials and Methods
2.1 Bacteria and Survival Test in Water Environment
Enterohemorrhagic E. coli 0157:H7 and non-pathogen Escherichia coli isolated from the patient and health person were kindly provided by the Aomori Prefectural Health Research Centre in Japan. Both bacteria were overnight incubated in Nutrient broth (Oxoid, England) and each 0.1mL was suspended in 10mL distilled water and kept in the experiment room to count viable cells at the planned intervals. Grown colonies on Rainbow agar plate were tested antigenicity against anti-EHEC O157:H7 antibody (Denka, Japan) each time to see antigenic changes during in water environment.

2.4 Preparation of Stx for Animal Toxicity Test
EHEC O157:H7 cultivated in nutrient broth (UK) overnight was treated with Polymyxin B to kill bacteria and centrifuged at 3,000 rpm 10 min followed by filtration by mill pore filter for tests (undiluted solution).

For these animal experiments, we got approval from The Ethics Committee of Hirosaki University Animal Research Organization.

2.5 Stx Detection in Liver and Kidney in Stx IP Animal Organs
Indirect immunofluorescent tests were applied to the liver and kidney sections prepared from the Stx ip animals.

3. Results
3.1 Survival Period of EHEC O157:H7 in Water Environment
Survival terms of EHEC O157 in a water environment were summarized in Table 1. Cells kept at a high rate of survival for six months, thereafter, gradually decreasing and 3 years later it became at 1.5×104 cfu/ml. Whereas control E coli died out at 2 years in water environment condition.

Table 1: Duration of survival of EHEC 0157:H7 in water environment 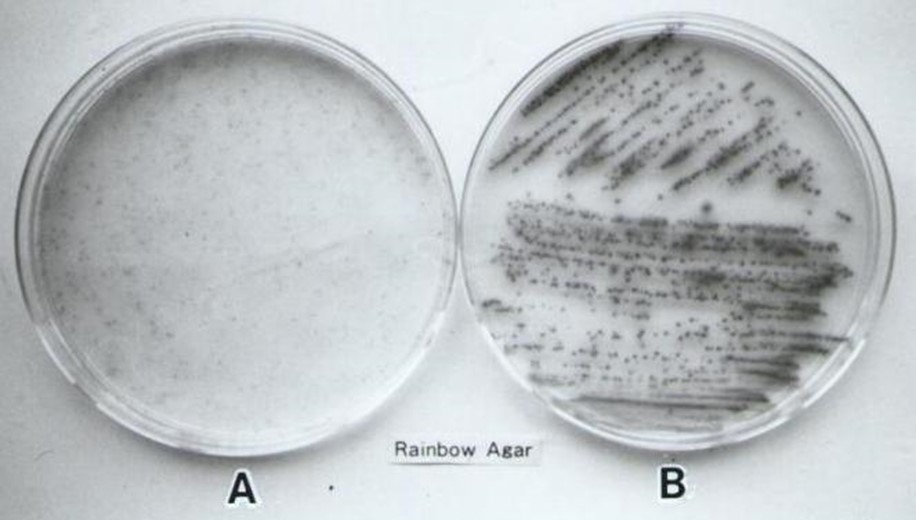 IP administration demonstrated the highest lethal toxicity against mice. Whereas the oral route was less toxic to animals, and the Stx activity was destroyed by heat treatment at 80℃, 30 min. 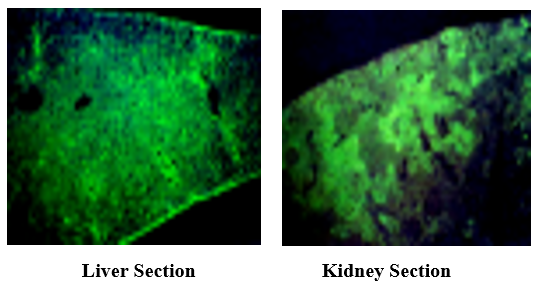 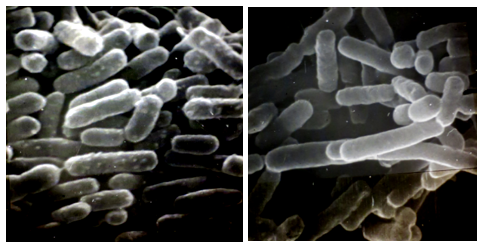 Discussion
EHEC 0157: H7 was first recognized as a pathogen in 1982 during an outbreak investigation of haemorrhagic colitis EHEC O157 infection can lead to haemolytic uremic syndrome (HUS), characterized by haemolytic anaemia, thrombocytopenia, and renal injury. To understand Stx pathogen to kidney including other organs toxins were IP injected and mainly kidney and liver were pathologically inspected to know whether Stx bound to these cells to make damages.

On May 28, 1996, an outbreak of food poisoning due to EHEC O157:H7 arose in the primary school in Okayama Prefecture Japan, 468 patients and 2 died caused by HUS. EHEC O157:H7 caused food poisoning serially occurred at elementary school via school lunch and almost came to end in Autumn at Hokkaido. After this historical huge outbreak, sporadic cases were reported each year that was never experienced before, suggesting this bacterium passed over the cold winter. To fight pathogens there are two strategies, collecting enemy information and developing weapons. As a weapon, we had developed the silver-coated ceramic applied oligodynamic action of silver in water [4].

At that stage, we shared less information on what going on with EHEC O157:H7 in water, soil, vegetables, hence mimicked less nutritious water environment was prepared to trace O157:H7 behaviours. In this situation O157:H7 showed us different behaviour on Rainbow agar forming colourless colonies, lowering Stx 1 and 2 producibilities, and cell elongation with a smooth surface. Colourless these colonies reacted with EHEC 0157:H7 antibody, and antigenicity was stable in a water environment. Therefore, agglutination test was essential for identification, and Rainbow agar observation was used just as a reference. When used Rainbow agar for O157:H7 isolation from water, they reported no 0157:H7 in inspected water because of all colourless colonies, and someone misunderstood that O157:H7 entered a viable but non-culturable (VBNC) state. The further report mentioned that survival of O157:H7 in water was mainly affected by the outer membrane protein composition, but not change in lipopolysaccharide and O157:H7 is a hardy pathogen that can survive for long period in water [5]. The outer membrane on bacteria is just a protein layer to protect against toxic substances invasion and is easily deleted.

The bacterial elongation phenomenon is occasionally observed as a kind of natural mutation caused to the failure of cell division. In our past studies on toxin producibility of Clostridium botulinum, a single cell from one colony was picked up by the manipulator and cultivated to check toxin production. A wide variety of toxin producibility in single-cell isolated was observed [6]. In other words, one colony consisted of a different nature single cell. This experimental fact raises the following question, where is the border between mutation and selection.

In response to unsuitable conditions like starvation or stress bacteria change their metabolic activity and cellular components to maintain viability to extend bacterial survival, and some cases enter the non-growing stage, and the heat shock protein(s) (HSP 60 and 69 kDa) with viable but non-culturable (VBNC) appeared associated each other to bacterial survival, therefore designing thermal processes in beef gravy must be considered for microbiological safety of thermally processed foods [7].

The 65 kDa HPS is considered to associate with varieties of bio-functional roles as tumour antigens, widely detected in animals and human tumour cells, leading to cancer immunotherapy studies [8], host defence against various microbial pathogens, and autoimmune inflammatory disorders [9]. HSP probably has a cross-talking ability with stress burden and VBNC in the microbiology world in nature and providing fantastic research subjects in the future.