Copyright: © © 2021 David R. Dolbow. This is an open-access article distributed under the terms of the Creative Commons Attribution License, which permits unrestricted use, distribution, and reproduction in any medium, provided the original author and source are credi

Effects of Hyperbaric Oxygen Therapy on a 47-Year-Old Male with a C6 Spinal Cord Injury and a Chronic Gluteal Pressure Wound.

Abstract
Many individuals with spinal cord injuries (SCI) suffer from pressure wounds and many have difficulty with healing. Hyperbaric oxygen (HBO) therapy has been reported to help with the healing of chronically troublesome wounds. The objective of this case report was to determine the effects of HBO therapy on an individual with a chronic gluteal wound and SCI. The single participant in this study was a 47-year-old man with a chronic SCI and chronic pressure wound over the left ischial tuberosity. HBO therapy was added to the participant’s standard medical care. Wound size, inflammatory blood markers, and quality of life via a questionnaire were monitored. The participant attended three times per week for fourteen weeks, and each session was 60 minutes.

A World Health Organization Quality of Life (QOL) questionnaire was completed before and after nine weeks of HBO therapy. The participant improved scores in the psychological and environmental domains but decreased in the social relationship domain. The participant's wound dimensions were measured over 14 weeks and showed improvement in all dimensions. The participant had blood measures taken before and at nine weeks of treatment. C-reactive protein levels decreased significantly while the white blood cell change was negligible. This case report demonstrates that HBO therapy can help with chronic wound healing, decreasing inflammation, and the production of changes in QOL.

Introduction
Pressure wounds are a significant and growing challenge for those with spinal cord injury (SCI). Individuals with SCI lack protective sensation and often have comorbidities such as diabetes and malnutrition which may complicate skin protection and wound healing [1]. Patients with SCI are among the greatest at-risk populations for developing pressure wounds with an incidence rate of 25–66 % [1]. Soft tissue injury resulting from prolonged and unrelieved pressure over a bony prominence results in ischemia and cell death. The hypoxic nature of pressure wounds impair healing and increases the risk of infection [2]. Interchangeable names for this condition include pressure wounds, pressure ulcers, decubitus ulcers, and pressure sores. The most common locations for pressure wounds are those that have soft tissue overlying boney prominences i.e., ischial tuberosity’s, sacrum, trochanter, heel, occiput, and back [3,4].

Hyperbaric oxygen (HBO) therapy is a treatment in which patients breathe oxygen while in a hyperbaric chamber pressurized to greater than sea level or 1.0 atmosphere absolute (ATA) [5]. It can effectively inhibit the generation of inflammatory factors and promote neuron repair and regeneration [5]. HBO therapy has been used to increase VO2max, treat thoracic SCIs, accelerate healing, increase cell metabolism, and remove free radicals. Other benefits include improvement in tissue oxygenation, increased perfusion, reduction of edema, decrease in the regulation of inflammatory cytokines, the proliferation of fibroblasts, collagen production, and angiogenesis [6].

The purpose of this case study was to determine the effects of HBO therapy on an individual with a chronic gluteal pressure wound and SCI. This is important because it could demonstrate support for this treatment in assisting with wound healing and improvement in quality of life.

Case Presentation
Participant
A 47-year-old man with a chronic SCI, osteomyelitis, and a chronic pressure wound (>1 year) over the ischial tuberosity of the left buttock. 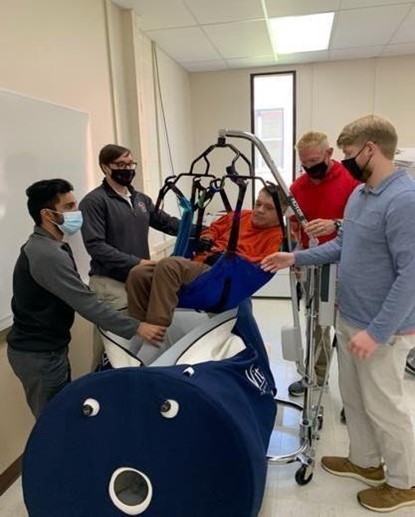 The participant was placed in a supine position on a cushioned mattress so that his bodyweight did not apply pressure to the wound. Oxygen was pumped into the chamber at a pressure of 4 psi (1.3 ATA). The participant breathed oxygen through a full-face mask at 10 liters/minute. The procedure was supervised by physical therapy faculty to monitor the participant’s tolerance of the activity. Each session lasted 60 minutes, then the chamber was depressurized, and the participant was lifted from the chamber with a battery-operated Hoyer lift. This procedure occurred three times per week for fourteen weeks. The measure of wound dimensions and blood inflammatory markers were completed by the primary care physician and healthcare providers.

The participant completed the World Health Organization Quality of Life (WHOQOL) BREF questionnaire before and after nine weeks of HBO therapy. The WHOQOL-BREF is divided into four domains, which were individually scored. The participant did have a significant improvement in the psychological domain (12 points), and the environment domain (6 points). However, the social domain decreased by 19 points. There was no change in the physical health domain.

The white blood cell (WBC) count and c-reactive protein (CRP) levels were monitored with the participant’s blood results. Both markers can be non-specific signs of infection and/or inflammation. In chronic osteomyelitis, the CRP is often elevated while the WBC levels often return within a normal reference range, which was the case in this study [7,8]. At the initiation of HBO therapy, CRP was 3.3 mg/dL (ref. range: <0.5 mg/dL) and WBC count was 5.1 K/µL (ref. range: 5.0 - 10.0 K/µL). At the end of nine weeks, the CRP was 0.6 mg/dL, and the WBC count was 5.0 K/µL. Blood measures were not taken at week 14.

Discussion
The purpose of this case study was to determine the effects of HBO therapy on an individual with a chronic gluteal pressure wound and SCI. The 47-year-old male participant presented with a stage four chronic wound (>1 year) and chronic tetraplegia (>32 years). The participant also suffered from osteomyelitis. While the participant has been extensively treated with antibiotics in the past, during the first nine weeks of this study the participant received only hygiene care and wound dressings. In addition to HBO therapy for 60 minutes, three days per week the participant was encouraged to maintain adequate protein intake as reports from his primary caregiver was that protein and nutrition intake was generally poor.

Blood tests were reported at the beginning and end of the nine weeks of HBO therapy. HBO therapy was likely at least partially responsible for the significant decrease in inflammation as antibiotics were not used during the drop in CRP levels from abnormally high to near- normal levels. During this time there were also significant decreases in the size dimensions of the wound. However, investigators chose not to report the measures because they were taken by a medical assistant rather than the physician and initial measurer. Topical antibiotics (meropenem and vancomycin) were sprayed into the wound twice daily from weeks 10-14 during the study.

The standard HBO therapy treatment for wound care includes HBO therapy for 1.5 to 2 hours per session for 20-40 treatments, although treatments may extend to as many as 60 sessions [1,2]. In the current case report, the participant received 27 treatments 60 minutes each for the first nine weeks and 42 treatments over the 14-week period. After 14 weeks of treatment, the primary physician repeated the initial wound measures and verified the earlier indication of wound healing as the wound size decreased in length, width, and depth.

It has been well established that one of the leading contributors to prolonged healing time is the decreased level of oxygen, resulting in a hypoxic wound. HBO therapy has been shown to be an appropriate intervention when addressing a chronic wound [1]. HBO therapy promotes healing in chronic wounds by increasing growth factors and local wound signalling by promoting a central stem cell release from the bone marrow [7,8]. HBO works by causing vasoconstriction into the capillary bed aiding in the absorption of fluid into the venous system. This leads to an enhanced flow of hyper-oxygenated plasma to the tissues and collagen formation to aid in wound healing, which can last from 2 to 4 hours after the conclusion of treatment [2].

An in-vivo study by Mulawarnati et. al. [6] showed that in Induced- Periodontitis Diabetic Rats, one outcome of HBO was a significant reduction in CRP levels. In alignment with this finding, the current study also found a significant reduction in CRP levels. This suggests that HBO played a role in reducing the chronic inflammatory process occurring in a patient with SCI and chronic osteomyelitis with a non-healing gluteal ulcer. The reduction in CRP levels due to HBO correlates with findings of a general decrease in inflammatory markers such as TNF-α and IL-6 [9,10]. The WBC count had only a minimal change from week one to week nine. As previously noted, the WBC count in chronic osteomyelitis returns within a normal reference range.

Conclusion
This case study reported the positive effects of fourteen weeks of HBO therapy on a patient with an SCI and chronic stage four wound. Due to the decreased wound area, this study has shown the promising effects of HBO therapy when added to regular wound therapy. The participants WHOQOL-BREF revealed a significant improvement in the psychological domain and the environmental domain while scoring worse in the social domain. The patients CRP levels were found to have a significant reduction and the WBC count had a negligible change over the nine weeks. This suggests that HBO played a role in reducing the chronic inflammatory process occurring in a patient with SCI and chronic osteomyelitis with the non-healing gluteal ulcer. The results show evidence that HBO therapy can positively affect patients with an SCI and chronic wound in the future. Further studies are required to substantiate the effects reported in this case study.

Limitations
As with all single-subject reports, results cannot be generalized to the overall SCI population. Another limitation was that an inflatable hyperbaric chamber was used which limits the amount of pressure to 1.3 ATA as opposed to 2.0 – 3.0 ATA provided by hard shell chambers.

Funding: This work was supported by the host university Professional Development Research Award.

Conflict of Interest: The authors report no conflicts of interest.

Ethics Approval: This study followed the principles of the Declaration of Helsinki. This study was approved by the host institution's Institutional Review Board.