Copyright: © © 2021 Rima Chaddad MD. This is an open-access article distributed under the terms of the Creative Commons Attribution License, which permits unrestricted use, distribution, and reproduction in any medium, provided the original author and source are credi

Introduction
The incidence of congenital heart disease is 0.4% to 5% of live births [1]. The embryonic development of the human heart is a complex process. It derives from embryonic mesodermal germ- layer cells that differentiate into mesothelium, endothelium, and myocardium and start with the formation of two endocardial tubes, which merge loop, and septate to form the four chambers [2]. It starts to beat by the 4th week, at the end of which two atrio- ventricular endocardial cushions appear to form the atrio-ventricular valves. During the expansion of the primitive right and left ventricles and the addition of migrating myocardial cells, a muscular interventricular septum forms from the primary fold or ring that partially separates the ventricles. By growing from the apex towards the atrioventricular endocardial cushions the muscular interventricular septum is formed [3]. Any defect in this embryonic phase can result in many congenital anomalies. The duplication of the septum is the rarest one.

Case presentation
A 46-year-old woman with unrelevant past medical history presented to the outpatient clinic for intermittent chest pain, palpitations, and shortness of breath on moderate exertion.
Physical exam including heart sounds was normal.
Vital signs showed a heart rate of 67 bpm, a BP of 130/70 and a saturation of 99 %.
ECG showed sinus regular beat without ischemic changes. (Figure 1) 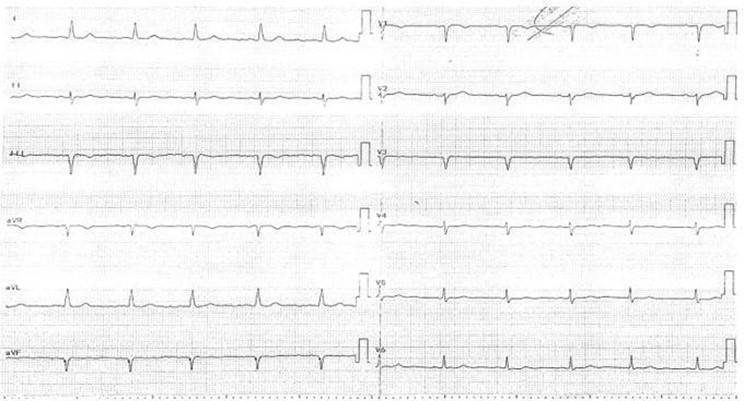 An exercise stress test was performed to rule out the ischemic cause of chest pain, which was clinically(chest pain) and electrically (STD with multiple PVCs) positive.
A coronarography was done showing that coronaries are free of significant atherosclerotic disease.
Subsequent cardiovascular magnetic resonance (CMR) imaging showed features of left ventricular non-compaction with an aspect of ventricular septal duplication without VSD. No associated thrombus or myocardial fibrosis with no evidence of infiltrative disease, and RVEF 63 %. (Figure 3).
The patient was started on a beta blocker with a follow-up visit after one month and was nearly asymptomatic.

Conclusion
We describe this rare case of congenital heart disease where the first impression was suggestive of abnormal insertion of papillary muscle or hypertrophy of the papillary muscle. CMR with delayed gadolinium enhancement imaging did not show enhancement compatible with metabolic or infiltrative disorders but a ventricular septal duplication.
Duplication of the interventricular septum is an extremely rare congenital abnormality. To our knowledge, this has never been described before.