Copyright: © © 2021 Igue K. This is an open-access article distributed under the terms of the Creative Commons Attribution License, which permits unrestricted use, distribution, and reproduction in any medium, provided the original author and source are credited.

Abstract
We report the case of a 68-year-old patient of Moroccan origin is known for limited systemic cutaneous scleroderma since 2012. The diagnosis of systemic scleroderma was selected in accordance with the ACR/EULAR 2013 criteria. In August 2018, she came in consultation for diffuse calcinosis presenting as a subcutaneous nodule in pressure areas such as elbows, knees, and also in the hands associated with pain and swelling. X-rays of the elbows, hands, forearms, and knees showed voluminous bilateral calcifications. The patient was treated with calcium channel blockers, colchicine, and then bisphosphonates with no effect on calcinosis.

Case Report
The objective of this article is to present the case of a 68-year-old patient and to review the different treatment options. 68-year-old patient of Moroccan origin, with a history of colon neoplasia, known for limited systemic cutaneous scleroderma since 2012. The diagnosis of systemic scleroderma was retained in accordance with the ACR/EULAR 2013 criteria: skin thickening of the fingers (4 points), telangiectasia (2 points), capillaroscopic abnormalities (2 points), Raynaud's phenomenon (3 points), positive antinuclear antibodies: 1/1280 (centromere type: 3 points). She was treated with calcium channel blockers. In August 2018, she presented in consultation for diffuse calcinosis in the form of a subcutaneous nodule, in pressure areas such as the elbows (1B and C), knees (1D) but also in the hands (Figure 1 A), associated with pain and swelling (Figure 1). There was also Raynaud's phenomenon and telangiectasia on the face. The cardiopulmonary and digestive examination was normal. Rodnan's score was 15/51. The biological assessment showed a normal blood count, no inflammatory syndrome (VS, normal CRP). Kidney and liver function were normal. The phosphocalcic balance was normal. Immunological workup showed 1/1280 positive anti-nuclear antibodies, positive anti-centromere antibodies. While anti-dsDNA, anti-ENA, rheumatoid factors, and anti-CCP antibodies were negative. X-rays of the elbows, hands, forearms, and knees showed voluminous bilateral calcifications (Figure 2). Chest X-ray was normal. Thus, the diagnosis of localized cutaneous SSc associated with calcinosis. Treatment with colchicine and then bisphosphonates was started.

Figure 1. Photograph of the left fingers (A), the forearms and elbows (B, C) and the right knee (D) showing the presence of calcinosis and calcinotic nodule. 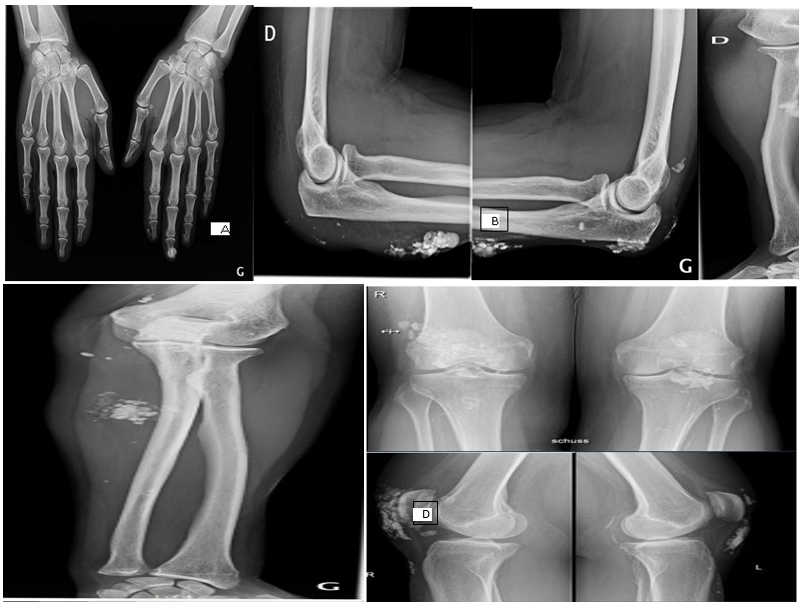 Figure 2. X-ray of the hands, forearms and knees showing the presence of large calcification.

Discussion
Calcinosis is the deposition of calcium hydroxyapatite in the skin and subcutaneous tissues [1,2]. The prevalence of calcinosis in patients with SSc is in the range of 20 % to 40 % [5]. Although calcinosis is frequently encountered in patients with localized cutaneous SSc, formerly known as CREST syndrome (Calcinosis, Raynaud's phenomenon, esophageal involvement, sclerodactyly, and telangiectasia), it also occurs in forms with diffuse cutaneous involvement [6]. The pathogenesis of calcinosis associated with SSc is unknown and there is currently no treatment with proven efficacy [8, 9]. General measures include improving blood flow to the extremities by avoiding trauma, stress, and exposure to cold. Antibiotic therapy covering streptococci and staphylococci if there is a suspicion of superinfection of calcinotic lesions [10]. Paracetamol, non-steroidal anti-inflammatory drugs, and opioids for pain relief [11]. Many treatment options have been tried over the years, but none have been accepted as standard treatment [2, 7].

Calcium channel blockers
Several studies have shown an effect of calcium inhibitors (CI) on the intracellular calcium concentration in calcinotic tissues. Diltiazem is the most widely used CI to treat calcinosis in SC at a dose of 240-480 mg/day with controversial efficacy [12, 13, 14]. In a retrospective study of patients with connective tissue disease and calcinosis, nine out of seventeen patients who received diltiazem (≤ 480 mg/day) had a partial response to calcinosis [13]. However, in another series of twelve scleroderma patients treated with diltiazem 180 mg/d, only three had discrete radiographic improvement [14].

Bisphosphonates
Bisphosphonates may be useful in reversing the calcification process by inhibiting the macrophages responsible for the production of pro- inflammatory cytokines and the reduction of bone resorption [15]. Brief reports describe an improvement in calcinosis after treatment with pamidronate, alendronate, and risedronate. However, given the paucity of evidence, the efficacy of bisphosphonates in the treatment of calcinosis remains uncertain [16].

Sodium thiosulfate
Sodium thiosulfate (STS) topical, intralesional and intravenous has been studied as a treatment for calcinosis [17]. Goossens et al. reported two cases of weekly intralesional injections of 1 to 3 g of STS with pain relief, functional improvement, and a 59 % reduction in height after 12 months [18]. A larger series describes the treatment of eight lesions in six patients (five with STS and one with nephrogenic systemic fibrosis) with injections of 12.5 to 275 mg STS 150 mg/ml for up to 4 weeks. At weeks 4 and 12, lesion size decreased by 67 % and 90 %, respectively, and all patients reported improvement in pain and disability [19]. Several studies have demonstrated the efficacy of STS in the treatment of calcinosis however, controlled trials are needed before sodium thiosulfate (either IV or topical) can be recommended as a standard treatment for calcinosis [16,17].

Colchicine
Several studies recommend colchicine as a first-line treatment [20] although there is very little evidence. In the Mayo Clinic, a retrospective series of 78 patients with calcinosis (including 24 with SSc) [21], the only patient to receive a complete response to medical treatment was one of eight patients treated with colchicine. Since areas of calcinosis can cause "flare-ups", probably due to loss of crystals in the soft tissues, this approach may be justified.

Biotherapies
Rituximab is the most widely used biological agent in the treatment of calcinosis (RTX). One case report showed complete resolution with RTX administered in four weekly infusions (375 mg/m2) [22]. However, other studies have shown a progression of calcinosis 6 to 12 months after stopping RTX. Activated macrophages appear to play a role in the pathophysiology of calcinosis and TNF alpha has been shown to be present in calcinosis. Consequently, infliximab has been tried effectively in a series of five patients with myositis and one with overlapping syndrome [23].

IV Ig is an immunomodulatory treatment and has been tried in a few cases of calcinosis with conflicting results. In the positive Schanz's study, the authors postulated that the improvement in calcinosis was due to an anti-inflammatory effect of IV Ig, possibly by inhibition of macrophage function [24]. Other treatments such as warfarin, minocycline, ceftriaxone, aluminum hydroxide, and triamcinolone in the treatment of SSc calcinosis with controversial results [25, 26]. Extracorporeal lithotripsy improves the pain and size of calcinosis. Surgery is reserved for severe and refractory calcinosis.

Conclusion
Calcinosis is a frequent and difficult to manage complication in patients with systemic scleroderma. Many treatment options have been tried over the years, but none have been accepted as standard treatment. Only sodium thiosulfate has shown some efficacy.