Copyright: © © 2021 Collin Liu, MD, MS. This is an open-access article distributed under the terms of the Creative Commons Attribution License, which permits unrestricted use, distribution, and reproduction in any medium, provided the original author and source are cr

Abstract
Vertebral artery (VA) transection is a rare and uncommon presentation of traumatic injury. It is more commonly seen with penetrating neck injuries than with blunt cerebrovascular injuries (BCVI). Transection of VA secondary to BCVI is associated with 100% mortality in several case reports and series. In this case study, we present a 60-year-old female who sustained a fall downstairs resulting in a right C3 transverse process (TP) fracture and right VA transection. The patient had active exsanguination from both the right proximal VA through anterograde flow and the distal ipsilateral VA through retrograde filling from the contralateral VA leading to cervical hematoma. She underwent emergent sacrifice of VA via coil embolization of VA proximally as well as distally via retrograde access through the vertebrobasilar junction (VBJ). Post-operatively, the patient was neurologically intact with no imaging signs of posterior circulation stroke. We describe our technique of sacrificing proximal and distal VA as well as important factors affecting the outcome.

Introduction
Background and Importance
Blunt cerebrovascular injuries (BCVI) including non-penetrating injuries to the carotid and vertebral artery (VA) are rare and under-reported. The incidence of BCVI is estimated at 27 % while traumatic VA injury is estimated at 3 % to 19 % of all non-penetrating polytraumas [1,2]. VA blunt injuries resulting in transections are even rarer, at only 3 % of all BCVI [3].

In contrast, penetrating neck injuries involving the VA or carotid artery have an estimated incidence of 1 % to 7 % [6,7,8]. These patients appear to have better outcomes compared to patients with BCVI after successful endovascular deconstructive treatment of transected VAs proximally and distally by navigation through the VBJ [5,6,7].

Clinical Presentation
A 60-years-old female with a past medical history significant for atrial-fibrillation and mechanical mitral valve on warfarin presented after falling multiple stairs. She complained only of neck pain with no neurologic deficits. On exam, she had noticeable soft palpable enlargement over the anterior neck. CTA of the neck revealed a right C3 transverse process (TP) fracture and right VA dissection with contrast extravasation into the soft tissues (Figure 1).

Figure 1: CTA of the neck demonstrated right-sided C3 transverse process fracture with vertebral artery transection and contrast extravasation into the soft tissue. (axial image to the left, coronal image in the middle, sagittal image on the right).

After reviewing her head and neck CTA from the previous hospitalization, it was determined she had co-dominant VAs as well as a right fetal posterior communicating (PComm) artery supplying the right posterior cerebral artery (PCA) (Figure 2). After discussion with the patient and family, we proceeded with an emergent diagnostic angiogram (DSA) with the intent to reconstruct or deconstruct the right VA. Our Institutional Review Board was consulted and patient consent for this case report was not required as there are no patient identifiers. 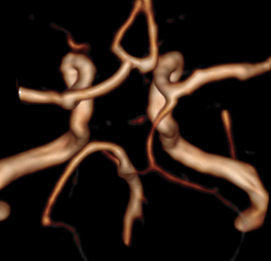 The femoral artery was accessed and 5F DAV® (Cook Medical, Bloomington, IN, USA) was navigated to the left common carotid artery (CCA), left VA, as well as the right CCA for a full DSA of head and neck. DSA of the right VA demonstrated contrast extravasation into the soft tissue at the level of the TP fracture (Figure 4 a,b,c). DAV® a catheter was then exchanged with a 5F-MPD Envoy® (DePuy Synthes/Codman Neuro, Raynham, MA, USA). We then used Synchro-2® (Stryker, Kalamazoo, MI, USA) wire and Excelsior® SL-10 catheter (Stryker, Kalamazoo, MI, USA) to navigate through the site of contrast extravasation traveling anterograde through the right VA to reconstruct or deconstruct it. However, the wire extruded out of the injured vessel into the soft tissues. An attempted super-selective road map was also unsuccessful as the contrast extravasated into the soft tissue without filling the distal VA. At this point, coils were utilized to occlude the proximal right VA (Figure 4d).

A subsequent left VA DSA revealed continued extravasation of contrast from retrograde flow into the right distal VA (Figure 4e). An initial attempt with an SL-10 catheter over Synchro®-2 microwire to navigate the vertebra-basilar junction (VBJ) to the contralateral VA was unsuccessful because of the tight turn. We subsequently switched to the Prowler® Select™ Plus (Codman Neurovascular) steamed-shaped into a tight “J” catheter tip and again were unsuccessful. We then placed an extensive shape at the tip of the Synchro® wire as illustrated in figure 3. Using a similar technique to shape Synchro® microwire into a double angle, we then positioned the distal catheter into the left PCA, which allowed us to successfully track the microwire down to the contralateral right VA inferior to the posterior-inferior cerebellar artery (PICA) and superior to the site of extravasation where several coils were subsequently deployed. Finishing runs did not reveal any contrast filling from the injured VA with the exception of minimal blush from the muscular branch of the left VA (Figure 5).

Figure 3: Shape placed on the Synchro® wire and the Prowler® Select™ Plus catheter to assist in navigating the vertebrobasilar junction to access the contralateral vertebral artery

Figure 5: digital subtraction angiograms of the vertebrobasilar system anterior-posterior view a) demonstrates utilizing the Prowler® Select™ Plus with the Synchro® microwire navigating the acute angle of the vertebrobasilar junction to access the contralateral right vertebral artery as shown by the triangle b) coiling of the distal right vertebral artery. The Block arrow shows the coil mass. (c-d) contralateral left vertebral artery contrast injection post-coiling to evaluate for occlusion. A small muscular branch from the left VA transversely crossed midline into the area of the previous extravasation with minimal blush emphasized with arrows.

Post-operatively, the patient remained intubated until post-operative day four after her neck swelling resolved. MRI/MRA after the procedure did not reveal any diffusion restriction or stroke in the posterior circulation (Figure 6). The patient was neurologically intact and discharged with a cervical collar. On her 2 monthly clinic follow-up, she remained neurologically intact with no residual or recurrent pseudoaneurysm flow or arteriovenous fistula (Figure 7). 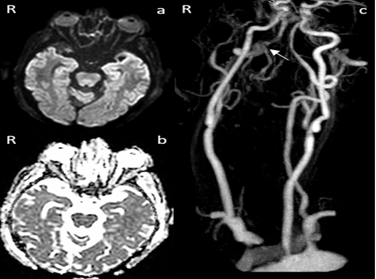 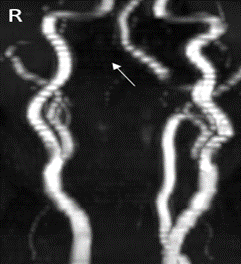 Figure 7: 2 month follow up MRA without evidence of pseudoaneurysm or arteriovenous fistula

Conclusion
Vertebral artery injuries are rare and account for 2.4-6.1 % of all arterial injuries and 7.1 %-19.4 % of cranial-cervical arterial injuries [6]. Trauma to the VA can lead to dissection, pseudoaneurysm, transection, arteriovenous fistula, mural hematoma, and occlusion [6]. Transection of the VA is associated with high mortality and morbidity. The clinical outcome can range from asymptomatic to vertebrobasilar insufficiency, posterior circulation infarct, and death [3]. Treatment of transected VA is difficult because of the deep-seated location in the neck for surgical exposure and access for ligation. Alternative therapies largely involve endovascular approaches including covered stent for reconstruction and embolization for occlusion.

In our case, a covered stent was considered but not possible as we were unsuccessful in traversing across the transection to deploy a stent. The patient was neurologically intact post-operatively likely because she had co-dominant VAs. In addition, we were able to preserve perfusion through the PICA ipsilateral to the right VA injury by confirming we were inferior to the PICA prior to coiling the distal right VA. There was no competing forward flow in the distal V4 segment of the right VA so the retrograde flow from the contralateral VA provided adequate perfusion as demonstrated by the absence of cerebellar infarcts post-operatively. Other factors that lead to a good outcome despite her multiple medical co-morbidities include: 1) no neurologic deficits pre-procedure; 2) no spinal cord injury or other injuries; 3) right fetal PComm circulation decreasing her dependence on the vertebrobasilar system to supply the PCA distribution.