Copyright: © © 2021 Mahboubeh Kalate. This is an open-access article distributed under the terms of the Creative Commons Attribution License, which permits unrestricted use, distribution, and reproduction in any medium, provided the original author and source are cred

Abstract
UV rays have been used to sterilize the air in certain environments since about 1900 and have been used for decades to help reduce the growth of airborne pathogens as well as surfaces in laboratories, health centers. UV radiation can be effective in removing airborne contaminants. Some air sterilization systems are combined (filtration and UV) to be used more efficiently against biological agents in special conditions. In the UV air purification method, pathogens in the air are eliminated in the face of UV radiation by damaging the nucleic acid.

On the other hand, UV is widely used as fixed lamps on the ceiling of the room (approximately 240 cm from the floor) that create horizontal layers of UV energy on the work area and surfaces. This study aimed to investigate the effect of UV rays on-air and laboratory surfaces from 2.40 and 3 meters from the floor. For this purpose, 2 points were selected for checking the surfaces and 2 points for the ambient air of the laboratory. In two months, 40 working days were planned for the two desired intervals. According to the results, the percentage of UV lamp removal at a height of 240 cm from the floor was more than 3 meters. The average removal for surfaces at a height of 2.40 m was 77 % and at a height of 3 m was estimated at 45 %. The rate of elimination of air pollution in the laboratory was 81.1 % and at a height of 3 meters, 44.3 % was recorded. It is recommended to disinfect the surfaces and floors of microbial laboratories with suitable chemical disinfectants before turning on the UV lamp after finishing the daily work.

Introduction
UV rays have been used to sterilize the air in certain environments since about 1900 and have been used for decades to help control and reduce the growth of airborne pathogens as well as surfaces in laboratories, health centers. [7]

This type of disinfection system also has limitations that can be reduced to the low output of lamps and reduce the intensity of UV rays produced by a lamp by increasing the distance from it; named. These devices necessarily rely on the natural rotation of the air inside the room to bring microorganisms into the space near the lamp (where there is enough radiation). [9]

Normally, the energy of UV rays causes germination through the effect on the DNA of microorganisms and the production of dimethylamine inside DNA strands, which prevents the growth and proliferation of microorganisms because of DNA breakdown. Although some damage can occur to parts of the cell wall and cellular material, the primary microbial effects are due to alterations in DNA. [1]

UV radiation can be effective in controlling the flow of air from contaminated particles to varying degrees. For example, studies have shown that Mycobacterium tuberculosis is an airborne agent that is inactivated by UV systems, which are often installed on the roofs of rooms to disinfect the air. [2]

Research Methods
So far, most of the empirical information that led to the development of UV systems dates back decades. Based on these observations, the performance of these systems in the actual is known poor [7]. Although UV radiation is known to be an inactivator of microorganisms and a growth inhibitor, there is insufficient evidence that this radiation alone can be effective in engineering control to prevent the transmission of certain pathogens. [7]

All viruses and almost all bacteria (except spores) are moderately vulnerable to UV exposure and the extent to which the effect depends on the species and genus of the microorganism. Spores that are more resistant to bacteria than UV can be removed by air filtration without the use of UV. [7]

Some air sterilization systems are combined (including filtration systems and UV radiation) and can be used more effectively against biological agents in special conditions. Studies are shown that UV is used in health centers as a supplement to spatial ventilation, to inactivate infectious agents in workplaces, surfaces, and air [8].

Numerous laboratory studies have been performed to investigate the effects of UV on a variety of microorganisms under different conditions of temperature and humidity, but few of these studies, have examined the practical application of UV in microbial laboratories [5].

Most of the information about laboratory research is done under simulation conditions. in 2009, A study was used as a guide by the National Organization for Occupational Safety and Health (NIOSH) on the use of UV systems in the control and prevention of occupational tuberculosis disease. This study examines the practical factors that can significantly affect the quality of UV systems [9].

Generally, there are four ways to reduce the risk of transmission of pathogens via air:

In the UV air treatment method, the pathogens in the air are eliminated in the face of UV radiation by damaging the nucleic acid [7].

In a study, a Taiwanese researcher identified the following NOTES:

Viruses with ds RNA or ds DNA is less exposed to UV.

On the other hand, UVs are widely used as fixed lamps on the ceiling of the room (usually attached to the ceiling) and create horizontal layers of UV energy on the work area and surfaces [5].

Miller et al reported that the effects of UV decrease when installed spatially in a corner of a room. This result is consistent with the findings of Riley and Permutt, who say that the wide distribution of a low-radiation UV lamp is more effective than a high-radiation lamp that shines only at one point. The ceiling UV system, if designed to generate an effective amount of UV rays, can effectively inactivate most pathogen microorganisms [5].

Radiation from all angles to a small area of space and time and the exact dose of UV radiation on the ceiling of the room produces radiation in the range of 30-50 mv/cm2. The UV lamp should be installed in such a way that it creates a uniform distribution of UV rays on the ceiling as much as possible [2].

A study by Mill et al for UV lamps mounted on the ceiling to examine airborne bacteria found that more than 90 % of the identified bacteria were inactivated, but this was lower for resistant bacteria and fungal spores [5].

When hot air enters the room through a duct in the ceiling (this happens in winter when the heaters are on), the hot air is easily placed on the cold air at the bottom and the effect of the UV system is greatly reduced (Because germs cannot move upwards to be exposed to UV) [9].

Experimentally, in ceiling UV systems, the amount of radiation produced in the roof area was greater and the effects of UV rays on the aerosol bacteria (a branch of Mycobacterium) was greater). However, it seems that this increase has a threshold limit so that by increasing the corresponding UV dose, the system's ability to inactivate and kill microorganisms does not increase [7].

For maintenance of UV lamps, Clean the UV lamp bulbs and control the useful life of the lamps periodically (approximately every 6 months) to ensure that the radiation intensity is sufficient to kill the microorganisms [7]. Wavelength intensity decreases with the hours of use and the type of lamp glass coating, which of course will vary depending on the type of lamp manufacturer [7].

Schafer et al proposed a method for measuring the effect of UV lamps and found that in a typical room this effect changes up to 3 times depending on the distance and this is a defect for the lamp. Ordinary this happens when the lamp is fixed [5].

generally, the effect of these UV lamps depends on the following factors:

The main factors affecting UV quality include temperature, RH (humidity), and the amount of lamp output [2]. Several studies have shown that the effect of UV systems installed on top of a room (attached to the ceiling) decreases with increasing humidity. Therefore, for maximum productivity; Humidity should be up to 60 % or less and the temperature should be between 20-24 ° C [2].

Attention to human health
According to a medical journal in the United States, the biological effects of UV rays in humans due to excessive exposure to UV radiation depend on the photon energy of the waves and the duration of exposure. Harmful effects are generally limited to the skin and eyes [7].

Artemia (redness of the skin and sunburn) is the most common absorption effect on the skin. Prolonged exposure to UV rays can cause skin aging and increase the risk of skin cancer. If the facility is not properly installed, staff in the room may be exposed to high doses of UV radiation [7].

Prolonged exposure to UV radiation can have adverse effects on the eye and cause keratitis and conjunctivitis. According to current standards, one cannot expect UV rays do not have a bad effect on human health. However, it should be emphasized that UV rays cause skin cancer and cataracts in humans [7,2].

The purpose of this study was to investigate the effect of UV radiation on air contamination load and laboratory surfaces at distances of 2.4 and 3 meters from the floor. For this purpose, 2 points were selected for checking the surfaces and 2 points for the ambient air of the laboratory. In two months, 40 working days were planned for the two desired intervals.

To moisten the swap, we placed it in a test tube containing physiological serum and sterilized the tube containing the serum and swab with an autoclave. Then sterile swab was moved on the selected surface and in the next stage, culture was performed by surface cultivation method on the surface of plate count agar medium. (A separate swab and a physiological saline tube were used for each point).

Simultaneously for two points (on the work platform and above the surface of the refrigerator) two plates containing plate count agar were placed for 15 minutes and the lid of the plates was left open, and the culture medium was fully exposed to airflow. So far, the first step was to take a sample of the laboratory surface before lighting the UV lamp. After sampling the first step, the UV lamp was turned on for 15 minutes. (When the lamp is on, the expert must be out of the lab and turn on and off via the switch outside the lab).

The plates were placed in an incubator at 35 °C for 48 hours (plates that were cultured before and after the lamp was turned on) and after the incubation period, the number of colonies grown on the plate was counted using a counter colony device. 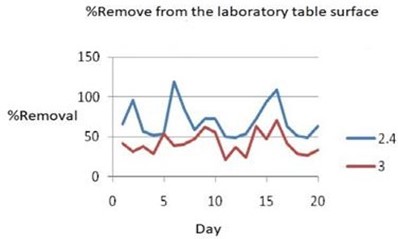 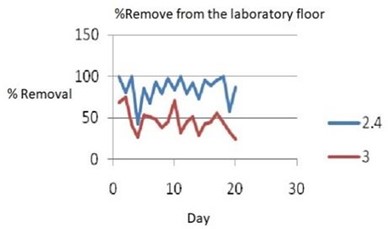 Diagram 2: % Removal from the laboratory floor 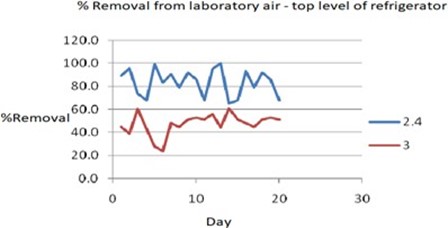 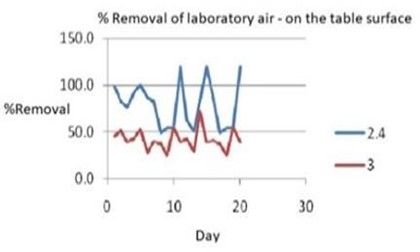 Diagram 4: % Removal from the air- on the table surface

Conclusion
When UV is used to purify the air, it should be installed in the air outlet of the ventilation system to complete air filtration, and when used as engineering the supplement can be recommended on the ceiling or hanging from any laboratory.
When using UV rays, they are required to do the following.

UV radiation in the workplace can be dangerous if not properly installed and maintained, in addition to reducing the disinfection effect of surfaces and the laboratory environment. Tests to determine the relative sensitivity of microorganisms to UV radiation are not the same and standard in all laboratories. Instructions for testing and validation of ceiling UV systems are needed to ensure that these systems work as designed.