Copyright: © © 2021 Manel Ayoub. This is an open-access article distributed under the terms of the Creative Commons Attribution License, which permits unrestricted use, distribution, and reproduction in any medium, provided the original author and source are credited.

Introduction
Multiple myeloma is a malignant haemopathy characterized by a clonal proliferation of plasmocytes invading the bone marrow resulting in bone, hematological and kidney damage.

This pathological plasmocyte clone is responsible for the synthesis of a complete monoclonal immunoglobulin or only a heavy or light chain [1].

The detection of free light chains at the serum and urinary level define the multiple myeloma with light chains LCM. In fact, this variety accounts for 10 to 20 % of multiple myeloma cases and are characterized by variability of the clinical picture as well as a poverty of biological signs [1].

The diagnosis of this pathology can be easy by combining images of bone geodes, medullary plasmacytosis and monoclonal immunoglobulin with immunofixation but most often these usual signs are not always present.

The use of sensitive and comprehensive techniques is essential to differentiate LCM from other rare myelomas at IgD or IgE or even non-secreting myelomas.

We report the observation of a patient who was hospitalized in the nephrology department of the Military Primary Hospital of Instruction of Tunis for the management of a kidney failure whose etiology was an LCM.

This is a case where the classical triad is not present, and the use of other more sensitive and specific examinations were essential in order to pause the diagnosis of LCM.

The aim of this work is to study the clinical and biological characteristics of Lambda-type LCM from a clinical case and a literature review.

Observation
This is a 50-year-old type 2 diabetic patient hospitalized in the nephrology department for the management of his kidney failure.

Clinically, the patient complains of asthenia, exertional dyspnea, and polyarthralgia.

Biologically the blood count objectified isolated microcytic anemia with hemoglobin at 6.8g/dl and VGM at 77 fl, renal failure with plasma creatinine at 780 umol/L and uremia at 40,6 mmol/L, and a biological inflammatory syndrome with 139 mg/L CRP

The phosphocalcic balance objectified a calcemia at 2.26 mmol/L, a phosphatemia at 1.88 mmol/L, the protein balance showed a proteidemia at 70 g/L and proteinuria at 6.03g/24h Serum protein electrophoresis showed a peak in the beta globulin zone estimated at 15  g/L  with a  slight decrease in albumin and gamma globulin (Figure 1).

The electrophoretic profile prompted us to perform serum and urinary immunofixation which showed the presence of light free chain of type Lambda (Figure 2). 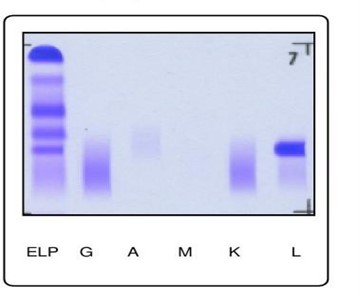 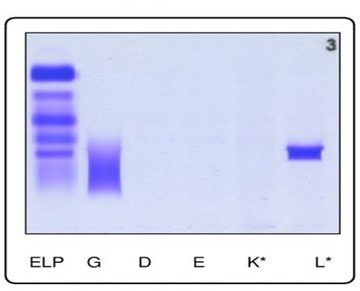 The sternal puncture objectified a plasmacytic infiltration estimated at 36% with cytological signs of dystrophy such as flaming cytoplasm, loss of the eccentricity of the nucleus, fine chromatin sometimes nucleified, multinuclearity, cytoplasmic vacuoles.

Discussion
Multiple myeloma represents about 1 % of cancers; LCM is a variety of MM that represents 8 to 20 % of all MM. This frequency seems to be underestimated because of the difficulty of his biological diagnosis [2,3].

Our patient is 50 years old whereas the average age of diagnosis of light chain multiple myeloma is 61 years which is slightly lower than that of other MM [4].

Our patient is male, the data from the literature shows that the distribution of this pathology is identical in both sexes as long as there is a male predominance in myeloma at Ig D [5].

The kidney damage found in our patients is very common and is found in 70% to 100% of cases and maybe the only major sign because it is the most aggressive myeloma [4].

The phosphocalcic balance shows paradoxically normal calcemia with hyperphosphatemia, this normal calcemia may be the result of hypocalcemia related to renal failure associated with hypercalcemia from osteolytic bone lesions.

Inflammation with high CRP is related to increased synthesis of interleukin 6.

From a hematological point of view, severe anemia has been observed in half of the cases of LCM with a more pronounced decrease in Lambda isotype LCM [6]. Myelogram which is a major examination in the diagnosis objectified a plasmacytic infiltration estimated at 36% with signs of pathognomonic dystrophy.

The protidic balance shows a protonema which is paradoxically normal value, this is due to the low molecular weight of the light chains as well as the decrease in the synthesis of polyclonal immunoglobulins and albumin.

The electrophoresis profile showed a monoclonal peak in the beta globulin zone and hypogammaglobulinemia at 5 g/L which is usually a major sign of LCM.

This dysglobulinemia is usually revealed by the presence of an abnormal band in only 50 % of LCM mimicking what is observed in myeloma at Ig A more rarely at IgG [4].

According to the literature, this band of free light chains is usually at the level of gamma globulins more rarely they are found in the zone of beta globulins and α2 globulins [4].

This serum peak could be due to the fact that free light chains can polymerize in polymer forms and thus reach high molecular weights up to 900 kDa, especially since in our case, the free light chain weight determination gave 10,74 g/L. A second plausible explanation is the lack of renal elimination in this patient.

These signs with the electrophoresis of serum proteins, serum, and urinary immunofixation confirmed the diagnosis by the presence of a band of precipitation at the level of the immune serum anti-chain light Lambda.

However, before concluding the diagnosis of MCL, it is essential to look for the other rarer MM which is the MM with heavy chain Delta (IgD) and heavy chain Epsilon (Ig E).

The macroglobulin β2 which is monitoring, classification, and prognosis marker was high in our patient which allowed us to classify our patient at stage III of the International Staging System (Table I).

Conclusion
In this observation and exceptionally for light chain myeloma, the serum electrophoretic trace shows an important monoclonal peak migrating at the level of the zone of the beta globulins mimicking what is observed in the myeloma with IgA or more rarely with IgG and paradoxically to what is observed in the LCM which are characterized by a normal profile or a hypo gamma globulinemia.

LCM is a rare pathology that requires ongoing attention on the part of the biologist due to the poverty of clinical and biological signs such as the absence of a monoclonal peak, normal sedimentation rate, normal protidemia, and the lack of detection of urinary PBJ on the strip.

All these arguments make it possible to pause the diagnosis as early as possible in order to avoid hematological, bone, and renal complications.